Bizarre, resourceful, foodie – a surreal step out of conventional comedy and theatre

Employing the use of a heat gun, wallpaper steamer and paper shredder within the space of an hour is unusual; using those tools normally found in a garden shed to cook food is a little bit weird. George Egg did just that, the premise of the show came after being put on a restrictive food regime by his wife he wanted to find ways to avoid the dullness of dieting and proceeded to think outside the kitchen to sate his appetite. Coming to the Fringe with a show straight out of the garden shed, we are shown ways to make meals from scratch with unconventional cooking equipment.

It was surreal and during the show I struggled to think analytically or even really think past the eccentricity of the anarchic heavy-metal fan and his desire to cut pasta sheets using an office paper shredder (spoiler alert: it worked surprisingly well). It was incredibly entertaining; the whole audience seemed bemused yet intrigued to see the perhaps mad methods to his culinary ingenuity unfurl. The chef-y stand-up ensured all eyes were firmly front and centre as 'technique' after 'technique' was brought to light each as confusing and impressively creative as the next.

George Egg successfully attempted to cook three meals – breakfast, lunch and dinner in an hour with no traditional running water, hobs or ovens whilst amusing a large audience. The gastronomic content of the show spoke for itself and created the effective humour, while Egg struggled to directly make the audience laugh on one or two occasions. This didn't hugely impact the show although it did mean that it wasn't as fluid as it could've been, causing brief periods of distraction. That considered, it was an interesting and inventive collaboration of cooking and comedy, a show like nothing you'll see anywhere else. 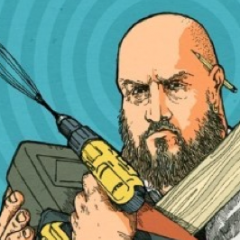 Bizarre, resourceful, foodie – a surreal step out of conventional comedy and theatre