Voice MagReviewsNight at the Museum

An interesting concept but more awkward than really funny

Night at the Museum is a gameshow style comedy performance in which three comedians are faced with a series of pictures of real historical objects which they have to 'identify', and then describe the history behind the object. I would use the term 'identify' loosely as the stories behind these objects are wild, wacky and incredibly improbable.

This show's host was Chris Forbes and the comedian contestants were Andrew Ryan, Sarah Callaghan and Mark Nelson.

The objects ranged from a 'circumcision machine' (a guillotine), to an ornament Rasputin took to bed (a part-dragon part-goat sculpture), to Stalin's jet-ski (just a jet ski). The stories were ridiculous and almost cringe-worthy - most of the humour came from how awkward it was to watch the comedian's under-pressure. There was definitely a balance between getting a story that would be funny without tipping into something so ridiculous it just didn't work. Forbes was possibly the funniest of all in his acerbic reactions to the other comedians and his questions deliberately placing them under pressure - digging for the history behind each object, and even inventing bits of their history in loaded questions that each comedian then had to work with. After each round the pieces were recapped and we learnt what each one was - if it hadn't already been evident.

The show would have benefitted from some additional effects such as backing music, which might have helped to diffuse the awkward silences and tension on the stage. With the right comedians the improvisation had the potential to be hilarious, but for some, being placed under pressure was evidently difficult. Moreover, some of the pieces yielded better comedy than others - Andrew Ryan's history of the 'circumcision machine' was particularly hilarious. The show was amusing and occasionally even laugh out loud funny, but the contrived nature did provide an overarching sense of awkwardness which couldn't quite be shaken. 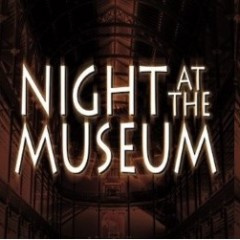 Night at the Museum

An interesting concept but more awkward than really funny