Kai Humphries informs the audience at the start of his show that he's going to tell a story about a fist fight between himself and his older brother. Pretty standard, right?

What began as a fairly normal (and very funny) stand-up show turned into something incredible. For half an hour Humphries sets the scene, telling tales of the incredibly close relationship he has with his brother and the comedy club they set up together in Blyth. He is relaxed and comfortable onstage, effortlessly engaging the audience and keeping the laughs consistent with a comedic timing that is absolutely spot on.

Accompanied by a slideshow, he takes the audience through his brother's bar chart of happiness (which is actually a line graph) and shows a snippet of Blyth's buy and sell page on Facebook. His commentary is brilliant and I didn't stop laughing for more than 20 seconds throughout this part of the show.

And then he tells us about the child with a rare form of cancer whose mother approached him and his brother for help. I won't say any more, because I don't want to spoil his story. It's intensely emotional, incredibly inspirational and wonderfully told, and still littered with Humphries' brilliant humour. If you want to know what happens, you'll just have to go and see his show. But I'll warn you now: take tissues. There was barely a dry eye in the house.

Kai Humphries: Punch-Drunk surprised me in so many wonderful ways, and I cannot sing its praises enough.

Kai Humphries: Punch-Drunk is on at Gilded Balloon Teviot at 18:45 until August 28th. For more information and to purchase tickets, visit the EdFringe website. 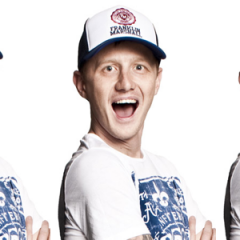