Ollie Jones-Evans, Anna Harris and Rajiv Karia return to Brighton for an hour of sketch comedy to a packed out space in the Broadway Lounge.

The trio were all highly energetic and it was evident they loved what they were doing. Each had something unique to bring to the group, which made for a powerful dynamic that created great stage chemistry. Anna Harris was feisty, with charm and charisma that shouted a get-up-and-go attitude. Ollie came across as - or perhaps most successfully portrayed - a slightly nerdy and uncomfortable figure and was often the subject of ridicule in the sketches. Rajiv meanwhile, held a droll and 'too cool for school' attitude with dry wit akin to Jack Dee or Romesh Ranganathan. An eclectic mix of personalities that all bounce off each other to produce some great comedy moments.

The sketches themselves were a mixed bag in terms of success, with some providing genuine belly laughs, but others petering out with an awkward chuckle among the audience. The best sketches were the ones that, in some way, subverted the comedic norms, or played on the racial and gender diversity of the group. Some of the political and social commentary interlaced within the sketches were also exceptionally funny, highlighting the ludicrous nature of the society we find ourselves in.

But there were several gags that fell flat. One repeating sketch about a house party with increasingly silly situations comes to mind as one that would have benefited from being brought back less. The Bond sketch was another that started off hilariously, but then went on just a little too long.

The transitions between scenes were often filled with a weird sort of flashback to real life, with the three discussing how they love the next sketch and psyching themselves up. I think the aim was to present a more carefree and lackadaisical approach to the sketches, or perhaps create the impression that they genuinely were debating which sketch to do? Whatever the intention, it sadly came across as wooden and awkward.

Fish Finger Fridays show a lot of promise and are still very early in their careers. They obviously have the creativity and comedic timing to produce great sketches, but all too often it felt they were playing it safe and came across as run of the mill. Be more daring, and perhaps focus on the satire and social commentary. 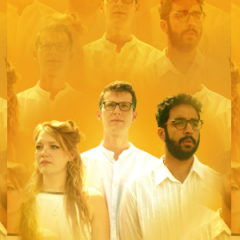 Ollie Jones-Evans, Anna Harris and Rajiv Karia return to Brighton for an hour of sketch comedy to a packed out space in the Broadway Lounge.