I don't know what it is about seeing two men jumping about a stage in lycra that is so inherently funny. Maybe it's the bizarreness of the situation? Or the absurd behaviour they engage in? With Zach and Viggo it's easy to identify - they're geniuses at physical comedy.

The American-Norwegian comedy duo are an absurdist clowning act, trained in the Parisian school Gaulier, that also brought you the greats such as Dr Brown and Sacha Baron Cohen.

For an hour they exploded around the stage, never slowing down or taking a break -- or giving the audience chance to breathe.

The pair understood that timing was key. Despite all the bombastic, contagious energy, the two knew just when to let a joke percolate, giving it time to breath as the comedy literally creates itself. I don't think I've ever laughed so hard to Gerry Rafferty's Baker Street.

The duo use audience participation to bring some of their sketches to life, and it can be absolutely brilliant, but it also comes with a degree of risk too. Pick someone who fancies himself as a joker, or decides to be a little bit belligerent, and the whole show can very quickly fall apart.

It just so happened that they did find themselves one such individual, who was both a little bit too eager to perform, while simultaneously missing on the very clear cues given. What should have been maybe a one minute skit stretched out for over five, yet managed to still be funny and avoid killing the mood. Again, their patience, and improvisation skills were what that held it together.

The show was not without mistake, but they felt so included in the overall performance that if you didn't think about it too hard, they could easily have been passed off as part of the zany, silly and over-the-top craziness the two were whipping up. Even when the crowd wasn't playing ball they took it in their stride and produced comedy gold from it.

I am still aching today because of how much I laughed. Ridiculous, crazy and chaotic, Zach and Viggo are an absolute must see. 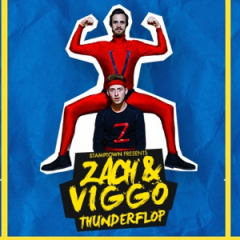