What was the value of literature and writing under a regime the Communist regime that rejected free thought? That's the question the play asked. It pits Stalinist Russia's five greatest writers together as they're employed to create a Communist propaganda masterpiece. It is a huge area to cover, with the exploration of betrayal, faith, sexual chemistry, and the value of an art form all thrown into there. A one hour five minute run limited the reach of the story and made things feel not only rushed but also thrown into the fray with subplots fighting each other.

The performances were very 50-50; actors that played Vera Fedorovna Panova, and Mikhail Bulgakov gave strong turns, especially the former who could have done a great deal more with her complex role as the rebel and the only female writer in the group. Conversely, Robert Wallis gave the main character, Yevgeny Zamyatin, a lacklustre turn with a voice, facial exaggeration and physicality that conflicted with his weedy, hermit character. With that came dialogue that didn't flow and delivery that jumped the gun – perhaps for the sake of brevity – doing richly written speech by Luke Ofield a disservice.

The Communist guards, one of whom is played by company co-director, Pip O'Neill, present a suitable amount of sweeping the ground from beneath our writers unawares. Infiltrating their confidence and picking them off one by one. They play an integral part of Yevgeny's dream, which are presented in beautiful physical theatre set pieces; swirling vortexes of his new nightmares for being thrust into this most terrifying writer's bootcamp.

A clearly deeply well researched bit of writing which could warrant from a bit more of a lot of things: more time, both to tell the story and to rehearse out the non-starters and interruptions; and a bigger stage that could benefit greatly from some marvellous, mobile set design. The script has the potential to be a modern classic with some enlightened talent in its actors. 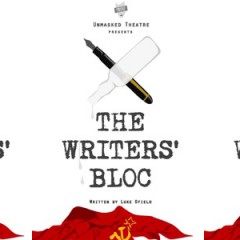