A review of Jeff Wayne's Musical Version of the War of the Worlds, performed live at the Dominion Theatre, including history, storyline, strengths, weaknesses and the effect it had upon me, by Jack Peacock.

As the next part of my Silver Arts Award, in order to complete Part C of Unit 1, on the 26th of March 2016, my family and I went to see Jeff Wayne's Musical Version of the War of the Worlds. Performed in the Dominion Theatre in London, the musical was based upon the album by Jeff Wayne which was released in 1978, which is in turn an adaptation of the classic science fiction novel, the War of the Worlds, by H. G. Wells. In this album, sections of the book are read, which outline the overall storyline, but the main body of the retelling is an original musical score, composed by Jeff Wayne, which captures the atmosphere, emotion, and otherworldliness of the story in the medium of music. However, 38 years after the album was originally released, Jeff Wayne's Musical Version of the War of the Worlds is on stage, with the original music, and an all-new cast. This cast was comprised of many well and lesser known stars of stage and screen, such as David Essex, Jimmy Nail, Heidi Range, Daniel Bedingfield, Madalena Alberto, Michael Praed and Liam Neeson – all of whom serve to give H. G. Wells' story and the music of Jeff Wayne a new lease of life in a new setting. Sure, I had seen musicals before, but this one, I felt, would be very different – and it did not disappoint.

The War of the Worlds follows the story of George Herbert, otherwise known as the Journalist, and the rest of humanity, after he witnesses alongside the astronomer Ogilvy a green flash from the surface of Mars. Herbert is assured by Ogilvy that the chances of anything coming from Mars are a million to one, but that slight chance comes true when the same flash enters the Earth's atmosphere to reveal itself to be a huge cylinder, which crashes into and buries itself within Horsell Common. We meet an Artilleryman, Parson Nathaniel and his wife Beth, and the Journalist's fiancée Carrie, as the lid of this huge cylinder gradually slides from its top, and from it crawls a writhing, tentacled creature – a Martian, whose goal, it seems, is to destroy all human life. It assembles and fires the Heat Ray, which destroys all but a few of those standing in awe on the Common, the Journalist being one of the survivors. However, the terror of the Martians is far from over, as many more of the invader plummet towards our world. They build Fighting Machines, great orbs of silver on spindly, spider-like hydraulic legs, whose eyes resemble that of a fly, armed with Heat Rays like that of the first Martian. Humanity seems doomed as what appears to be their last military hope – a huge warship known as Thunder Child – is sunk by the Martians. The Earth belongs to the aliens now. As the planet becomes resigned to its fate, an awful Martian flora begins to choke the Earth's surface, known simply as the Red Weed, and London becomes a jungle of blood-red vines. We once again encounter the Parson, who is convinced that the Martians are devils, and his wife, who eventually perishes in a falling house, while the Martians build the Handling Machine which allows them to devour humans. The Journalist comes upon the Artilleryman, who dreams of a brave new world beneath the ground, but it eventually becomes clear that these aspirations are nothing but delusions. The Journalist travels through 'the City of the Dead', a London strewn with corpses, and after encountering a howling Fighting Machine, believes his time has come. But the cry is not one of battle, but the wail of death, as the Martians have been thwarted not by man, but by the bacteria which man has long been immune to. Their bodies cannot handle the germs that humanity carries, and the aliens are massacred – effectively by what humans know as the common cold.

Moving on from the story, the performance itself was astounding. The story was told in such an immersive way that you really felt as though you were there alongside the Journalist, and that it was your Earth being invaded, not merely a fictional one. The lights which flew over the audience, the music which echoed off every wall, the emotion which reached right into the hearts of the audience – a truly inspirational piece of theatre. It is very difficult to highlight particular points of greatness within the performance, as it was all so good, but I feel that there are a few moments which particularly stand out. Firstly, I felt that one feature which I especially appreciated was the fact that the performance featured a huge, moving model of a Martian Fighting Machine which advanced across the stage in particularly explosive scenes. This pushed home to the audience the enormity of not only the Martians compared to the humans, but also how huge the invasion as a whole was – not only was it aesthetically a great addition, but it also contributed to the audience's comprehension of the story. In addition to this, I felt that the absolute standout factor was the music, Jeff Wayne's score which was the core of the performance. The combination of electronic sound effects, the blues music of the Black Smoke Band and the string music of the ULLAdubULLA Strings, created an unearthly and quite strange mix of sounds, but one which fully supported the absolutely alien feel of the performance. Synthesized leitmotifs represented the sounds of the Martian machines, and the live music created the ambience of the piece, the tension, the fear, the despair, the joy. The acoustics were amazing, and the music shook you to your core. It is even more difficult to find fault with such an impressive performance, but I feel that one slight criticism I can make is that Liam Neeson, who played the Journalist six years after the invasion, retrospectively looking on the events of the performance, delivered the narration differently to Richard Burton on the original album, and in my opinion, not as well. The voice on the album had a power to it which gave the piece a new level of suspense, but the narration provided by Liam Neeson didn't have that same effect, and therefore, in my opinion, didn't add to the drama. Furthermore, after discussing this with my Dad, he said he noticed that Neeson delivered his narration between the pieces of music, whereas Burton delivered his lines in the midst of the chaos, the former of which he felt wasn't as effective because it seemed to halt the action mid-flow.

From going to see this performance I have learnt how important and effective music is when partnered with the theatre, and as a result I will consider background music to a further extent in my next project within Drama. I would certainly recommend this play to all science-fiction fans, fans of great music and all those simply wanting to see a good musical, as Jeff Wayne has brought classic science-fiction to the modern world with great enthusiasm, style and imagination, capturing in his music the essence of H. G. Wells' classic tale of alien invasion. 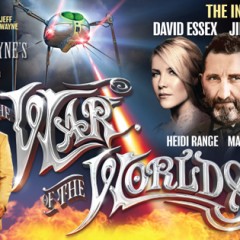 A review of Jeff Wayne's Musical Version of the War of the Worlds, performed live at the Dominion Theatre, including history, storyline, strengths, weaknesses and the effect it had upon me, by Jack Peacock.