Chocked full of pop-culture references, bad jokes and clever puns, Best Boy is a show that somehow manages to be completely ridiculous as well as impressively funny.

One of the things I love about Festival Fringe is the sense of spontaneity – a walk along the Royal Mile alone will have you meeting a plethora of colourful street acts that spring themselves upon you without warning. And after watching the stand-up double act Best Boy in the Underbelly, I felt like the show itself was full of that same spontaneity and buzz. The show consisted of a series of short comedic sketches which ranged from darkly funny to plain ridiculous, each one completely different from the last. The range of characters this pair created was quite impressive.

That said, the delivery of the show was not the most confident that I'd seen for dramatic stand-up comedy, and this did have an impact on how well the jokes were received. The audience enjoyed an amusing afternoon, but certainly didn't leave the venue in stitches. This was partly due to the dependence on pop-culture references in order for the jokes to make sense, and these fell flat for some members of the audience. However, the pair were very good at weaving running gags into the performance, and the pay-off of these definitely got the best laughs. Their strong point definitely seemed to be bringing the audience together under a common joke, and so when the point of the amusement came up again in an unexpected moment we all thought it was brilliant. Myself and my friend who accompanied me to the show definitely both enjoyed retelling these particular hilarities to our friends who had been to a different event.

By the end of the show, there was definitely a good atmosphere, most certainly helped by the audience participation throughout (which I ended up being roped into!). If you're looking for a pun-packed, fun-filled show, and you can contend with the huge crowds that the Fringe inevitably draws, this double act is a good way to spend your afternoon. 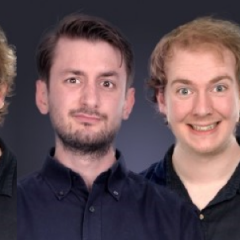 Chocked full of pop-culture references, bad jokes and clever puns, Best Boy is a show that somehow manages to be completely ridiculous as well as impressively funny.