This drag extravaganza is one hour and ten minutes of musical mayhem, with games and just the right amount of audience participation

Apparently I've been living under a rock, because before tonight I didn't know anything about Soho Thatcher or her 2 previous sell-out Fringe runs. If you, like me, had missed Mrs Thatcher's rise from the ashes, here's a quick catch up: universally loved*, mold-breaking Conservative Prime Minister Maggie Thatcher returned to the public eye to become a global cabaret star. Now bored with her success and hungry for the good-old-days of Saturday night entertainment, she is trying her hand as a game show host.

The team behind Margaret Thatcher Queen of Game Shows certainly know what they're doing, quirky set chocked full of Saturday night game show nostalgia, lighting and music that brings the space alive. With the audience split into 3 teams, people are chosen to compete for their team. What are they competing for? What prizes could the woman that took milk out of the hands of children possibly be giving away? Benefits of course!

All the performers are fantastic, everything about the show is top standard. The writing is incredibly clever and brilliantly funny, and the characters are superbly brought to life by the three performers. Each cast member is a wonderful actor, creating multiple characters on the stage. Featuring all your political favourites (and some less popular ones) the writing is bang up to date with current politics. Maggie herself is brought to life by the ingeniously funny Matt Tedford, as brilliant in the unscripted moments with the audience as the rehearsed.

The audience loved every minute of it, singing and clapping along to the musical numbers. Infectiously funny and with non-stop laughs this sell out show is everything you'd want from a game show hosted by Margaret Thatcher.

If you're someone who has switched off at recent political events, then go along and see history be rewritten in the most fabulous way!

*her words not mine

Assemble George Square Gardens until the 28th of August. For more info. @SohoThatcher 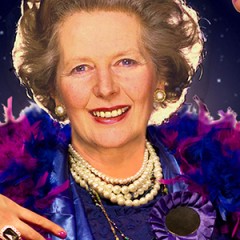 This drag extravaganza is one hour and ten minutes of musical mayhem, with games and just the right amount of audience participation