A great premise and talented actors, but the humour left a lot to be desired

This evening at the Assembly Roxy I became part of the 'studio audience' for late night TV talk show, Lords of Strut. Warmed up by a friar, to the sound of a bunny-headed DJ, this looked like it was going to be an interesting, if somewhat weird and random show.

The show begins and our very camp presenters enter: two brothers, decked out in gray suits with Hawaiian shirts. The characterisation of two very different, arguing brothers is brilliant - one as a hopeful star and the other as more scatter brained and profound, yet completely incompetent. This sets the premise for the show as a hard earned spot on TV, which they hope will propel them to fame - but obviously it all goes horribly wrong, and this was where the show itself went downhill.

The opening of the show involved an impressive and hilarious dance routine leaving no doubt that the Lords of Strut are capable of more than solely acting. The concept of the show was interesting and I was keen to see this unfold, particularly the humour arising from the brothers' relationship. The satire and mocking of the talk show structure was interesting and often funny, particularly the segment inspired by a 'Ted Talk', but the content was silly which became the shows' downfall: often pushing over into being just tasteless. At its worst, the use of humour about women's body parts - using a fat suit with opening genitals, just became incredibly crude. The rest of the humour consisted of a lot of bad costumes and poo gags - felling like a bad comedy from the 70s or 80s, presumably the decades that the show was aiming to reincarnate, emulate or perhaps even mock, although it was never clear which.

The elements of irony and use of audience participation were fun, and the final message of the show in terms of mocking mainstream media was interesting, however if this was the aim of the show it missed the mark. Thankfully the show ended on a better note, with a funny and deliberately bad slapstick scene that had everyone laughing. However this wasn't enough to redeem the rest of the show, which tried to do a silly Saturday morning kids TV kind of humour for adults, but just took it far too far.

Lords of Strut: Late Night TV Talk Show is on at the Assembly Roxy at 19:00 until 28 August (exc. 15 August). For tickets and more information, visit the Fringe website. 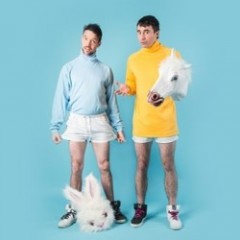 A great premise and talented actors, but the humour left a lot to be desired