It has been fashionable in recent years to set Shakespearean adaptations in the 1940s and 1950s, and this seems to be more of a trend than a meaningful stylistic choice for many productions. However, it is clear to see that Royal Shakespeare Company's 'play for the nation' makes use of the 1940s setting, and what may be seen as a British golden age, to draw out key themes, as well as providing a visually striking setting and incredible background music from the jazz band.

The typical story of the four lovers is played out in the conventional way, however the forward-thinking attitudes of the women, in demanding their own choice in lovers and establishing an active role in relationships, makes the vintage setting a perfect reflection of changing attitudes in sex and gender, which conflict with the conservatism represented by Hermia's father – here as an RAF pilot in uniform.

The setting makes way for an extremely dapper Puck, Lucy Ellison, in a suit and top hat, skipping barefoot around the stage to enact her mischief like a magical Artful Dodger.

Contrasted with the real world setting is an exotic fairy world, featuring the male First Fairy and a series of other fairies also in 1950s costume, however evidently of a different world, looking more like bar girls in long skirts and corset-style tops, while the First Fairy sports a waistcoat and bowler hat. Yet it is Oberon and Titania who are the most striking, played by Chu Omambala and Ayesha Dharker. Oberon is a commanding fairy king, in his white suit, holding calm control over the events of the night, quietly watching from afar. Titania, in full Indian dress, plays into the plot that this is where the fairies are from, an aspect of the play often forgotten. The stage is covered in rose petals and the characters are dusted in red and orange; hanging lights further evoke this atmosphere.

Another thing that makes this production different is how alongside the professional actors, the group playing the 'Mechanicals', the farcical acting troupe which stages the play within a play, has been different in every production – using amateur groups to play these characters, including Bottom.

As well as the amateur groups, a number of the fairies were played by schoolchildren, with this inclusiveness illustrating that the play really is a play for the nation in all senses.

The physical staging of the play was excellent – making the play very funny. For example, the quips about Hermia's height including the label 'dwarf' is embellished by a physical assault from fairy Ben Goffe, who has achondroplasia, commonly known as 'dwarfism'. Such staging illustrates the inclusivity of this play in a light-hearted manner.

This humour is counterbalanced with darker elements however, particularly in the clever use of stairs to stage the lover's confusion in running through the forest, orchestrated by the wily Puck. This scene is highly effective as the climax of the play and the last part of Puck's underhand fun before he must resolve his mischief.

Overall the play is a thoroughly enjoyable and original adaptation of the Shakespearean classic. While truly embracing an ambitious artistic idea in its aims of inclusion and updated setting it is also, very simply, a lot of fun. 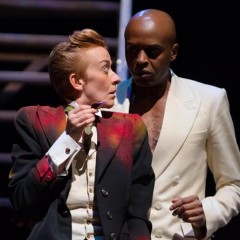 A Midsummer Night's Dream: A Play for the Nation