Voice MagReviewsDeep in the Heart of…

Deep in the Heart of Me is one of the more changeable shows of Brighton Fringe; terrific in points, losing its grip on the audience in others.

Deep in the Heart of Me starts off so, so well, with lead actress Alison Child delivering the hilarious script in a witty, and very often heartbreaking way. Janet is married, with kids - who like to leave her messages asking about dinner and lifts, teenagers, eh? - and is, most probably, a lesbian. The first portion of the play sees her alone, acting out various banal scenarios such as walking the dog and going to a parents evening, only her reactions and the off-stage voices of her various nagging family members give any hints as to the other people in her life. She squirms, fakes happiness and induces a constant stream of laughter from the audience, in this nuanced performance. The first actual human to enter the stage - besides Janet and a whimsical signer to stage right - is the charming Rosie, AKA Janet's potential love. Against the various missing presences in Janet's life, Rosie is immediately seen as a real person, life itself.

When Janet and Rosie meet their chemistry is undeniable, and the two actresses play the romance in a loving, endearing and utterly believable way; from the awkward winks and nods off to the audience to the lustful looks at one another. Then they start to sing. The singing, to begin with, is incredibly enjoyable. Each song - mostly Rat Pack - is performed for maximum comedic effect, as the pair hilariously act out their clumsy falling for one another. The first few songs are mixed with more rib-tickling dialogue, and great use of projections, which turn Sweet Waterfront's drab conference-style room into the Greek Island of Lesbos (badum tish!). The play feels warm, layered, and captivating.

But as the show progresses, songs take the place of dialogue, in a way that clunkily moves the plot from one point to the next. The delivery of each song becomes more direct, less nudge-nudge wink-wink, more simple. In many ways this change from complex script to upbeat tunes is intended to reflect the loosening of banality on Janet's life, the welcoming of a no-holds-barred kind of existence - and for that it does do its job. But, for this to really work it feels as though they would need a bigger venue and stronger sound - many loud interruptions over the system really didn't help, both actresses and audience members were wincing by the end it happened so often. When the audience were left to sing one tune to ourselves, only half the room obliged, and the all-out energy that is certainly intended by this sing-a-long last part of the play just didn't carry through.

That said, I did leave with a smile on my face, not least because, through all of this, I still thoroughly bought this nutty pair as a loved-up couple. 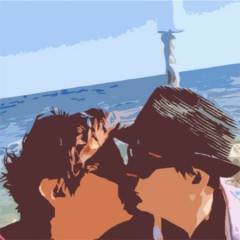 Deep in the Heart of Me

Deep in the Heart of Me is one of the more changeable shows of Brighton Fringe; terrific in points, losing its grip on the audience in others.