A symbolic, interpretive performance, which, when it clicked, really clicked.

Sissy's is a bizarre show, which attempts to express an experience with no words, only dance, and music.

The venue was the Marlborough Pub and Theatre, a pub that embraces the individuality of all. Everything from their drinks, to the décor, to the toilets is inclusive of everyone regardless of their gender expression. This played a large part in what made Sissy's 'click'.

The small theatre was sweltering but had excellent acoustics and the original music was innovative and effective. To this music moved Nando Messias who, with his movements, took us on a vivid and flamboyant journey through the experiences which led him to concocting this show with his stage mates.

Part way through, we were taken on a parade around the block with a brass band accompaniment. We felt like Nando's supporters, his fans and, as a popular show among the LGBT+ community, made the parade feel like one of defiant solidarity with Nando.

It wasn't until we got back from the parade where it all fell into place, where the realisation struck of what I'd just seen really meant. In another venue, this may have gone completely over my head.

Within the changing guises of Nando and company there exuded a sense of protection of identity – not with secrecy, but with defiance. Sissy's shows, literally, the detractors of Nando who try to break people, that they cannot have their cake and eat it. Their victims will come out fighting.

The Sissy's Progress by Nando Messias was a one-off show at Brighton Fringe. Read its official description here.

For performances around the country, you can find out more here. 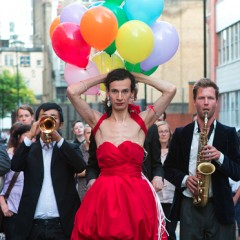 A symbolic, interpretive performance, which, when it clicked, really clicked.