Word of warning: if a venue suggests that, just perhaps, you need a plus one to not feel like a bit of a ninny at their event, they're probably correct. But, with such stellar comedians, I easily forgot I was on my tod at Krater Comedy Club.

Krater Comedy Club at Brighton's massive, lanes-dwelling venue Komedia is, without a doubt, an awesome night out. Having shrugged off the need for a plus one, I entered the jam-packed and sprawling underground space to find the best atmosphere the Fringe has offered me so far; tables laden with beers, packed, shoulder-to-shoulder with excitable crowds. This is comedy club, plus, the plus being a raucous group night out, or a slightly awkward date, as some of the front-rowers soon found out. Winner of many a Chortle Award and billed by The Independent as 'THE place in Brighton to catch stand-up comedy,' this is basically a done-deal, just sit back and enjoy. Oh, and take a mate if you're not into belly-laughing all alone.

The energy for the show was pumped up all night long, from the booming soundtrack on entry - empty stage lit up, feeling rather like the beginning of a boxing match - to the flawless MC'ing from resident funny-man Stephen Grant (ribbing a pair on a sort-of date, and managing a string of gay jibes at a couple in the front row that could have easily bombed or felt groan-worthy in a lesser performer's hands, but somehow came off as harmless and rib-tickling here) and the line-up of Tom Deacon, Ian Moore - coming on stage to manic whoops of 'Brian! Brian! Brian!' - and Sean Collins. The speed of the night was autobahn-like, every joke, and I mean EVERY joke, got a laugh, Grant moved on and off with ease and the mix of laddish banter that threaded through all of the acts - hot topics included wives, kids, the French and wee - felt fresh at all times; predictable terrain that felt endlessly original. My mouth was stuck in a constant donkey-like guffaw as I sat on my high stool at the back of the room (after accidentally joining a reserved table and wondering why I wasn't welcomed with open arms). I'd go again, and heck, I'd even go alone if I had to.

Perhaps a bit of a cheat to include this as true fringe comedy, it is a practiced outfit after all and can easily avoid the trials and tribulations of temporary fringe housing, but this is an undeniable five-star show. 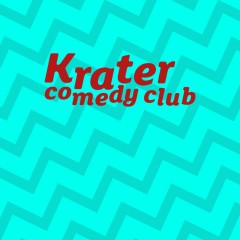 Word of warning: if a venue suggests that, just perhaps, you need a plus one to not feel like a bit of a ninny at their event, they're probably correct. But, with such stellar comedians, I easily forgot I was on my tod at Krater Comedy Club.