If you imagine this whole review in song, it might just do The Kinsey Sicks justice…

Prior to viewing the show 'Dragapella', (drag and a cappella) was a totally new concept to myself and Deputy Editor Tom who came to see it with me, but wow do I wish I'd come across it sooner. The show comprised of 4 hilariously over the top drag queens, who looked utterly magnificent. With the premise of the performance centring on the appearing on a TV show, with hidden cameras and even more hidden agendas, we were hooked.

Parodying classics, owning originals and engaging with the audience were all personal highlights. To the tune of ABBA's Mamma Mia, a member of the quartet sings about an STI, giving you an idea of the absurd but hysterical content to the show.

Shooting for stardom The Kinsey Sicks readily sign their lives away, completing various hilarious challenges, including one relating to the consumption of canine body parts. Satirically commenting on the nature of reality TV, LGBT America, global politics and dictatorships, the fabulous foursome was contemporary, catty, and comical.

Days on, I am still absorbing the performance, making The Kinsey Sicks very difficult to review. Yet, with an act staying in my mind so prominently for this long afterwards, I feel like anything but five stars just wouldn't fit.

The remarkable Kinsey Sicks deliver a multi-dimensional performance, encompassing everything one would want from such a show. 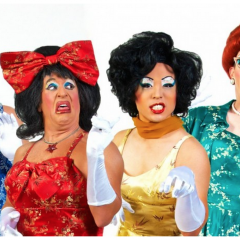 If you imagine this whole review in song, it might just do The Kinsey Sicks justice…