I'm inclined to believe them

We reviewed Next Best Thing last year, and felt they had a lot if potential, but had yet to discover a formula that worked for them. This year they have returned, and when we went, the room was packed out.

The sketch comedy duo seemed much more in sync this year, and their sketches were intertwined with a connecting narrative. This only became more apparent as the show went on though.

The show didn't really pick up for the first 15 minutes, with sketches that felt flat, and dare I say, contrived. However, at roughly around 20 minutes, the pair seemed to shift up a gear, or in fact, several gears. It was like the a rollercoaster, where for 15 minutes we were peering over the edge of the drop, and then suddenly, whoosh, over the edge we go.

It as almost jarring the dichotomy between the first quarter and the rest of the show. That is not necessarily a bad thing though. In the sudden acceleration, we were whisked rapidly away from the tepid beginning. Were I not obligated to remember the whole show for reviewing purposes I would have certainly left feeling like the whole show had been that incredibly funny.

The audience participation was solid, with the chosen victims looking appropriately awkward. Their inclusion in the sketches worked very well. Some of the pieces were very clever in their representation of real life, and the internal monologue that we all get in social situations.

The Next Best Thing have called this show Never Been Better, and I am inclined to believe them. They have come leaps and bounds in a year, and their content now works a lot better. There are, like I said, still gaps on the humour front, but they are less pronounced than before, and quickly get filled in. It still feels like they are yet to reach their potential, but they are one step closer to realising it, and when they do, Jay and Katie will be a force to be reckoned with.

Next Best Thing: Never Been Better is performing everyday until the 29th August (not 19th) at Opium (Venue 96). It's a free to enter event, and you can get more information on the Fringe website. 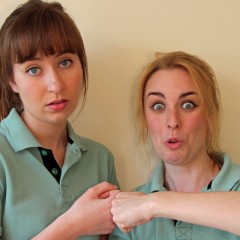 Next Best Thing: Never Been Better

I'm inclined to believe them