Introversion and a career in comedy, not two things you'd necessarily associate with one another, but Chris Stokes shows us just how the two can go hand in hand. The crux of the show was formed around his 'breakdown' and the subsequent journey he experienced as a van driver for a charity. Stokes takes us down memory lane, extrapolating out the most hilarious of stories from his past, and they really were brilliant.

From ninja seagulls to the grave loss of his beloved juicer witty puns were created through experience, something that I found incredibly genuine, and equally as entertaining. This genuineness was something that remained true throughout the performance, and was continued when I spoke to Stokes after the show.

Largely, the show was laugh-out-loud good, having a fantastic reception from the audience. Being a relatively late show too, it was definitely worth waiting up for however it wasn't anything life changing, holding it back from that last star. **** 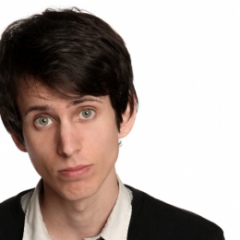