A show entitled 'Post-Coital' is appealing enough, but when I got in there, my God was I in for a treat. Stand-up comic Abigoliah Schamaun comically enchants, weaving a web of confessionary tales to disgust, entertain, and tickle the ribs of her viewers. Utilising lighting and sound to bring forth the confessions, I really was absorbed entirely into the performance.

Opening the show by asking the audience where we heard about her aided in keeping us engaged and responsive, not that it was necessary, as once the comedy commenced everyone was laughing. That was notable too; I've found that often the audience are divided with humour however, this was not the case – the entire place was raucously amused.

With jokes on her sexuality, kinkiness and past relationships it was original and highly relatable. This reliability was continued throughout, with her directly addressing the audience in order to gain information about their own post-coital confessions, something that will change every night, making it unique to each audience.

Long story short this show was an incredibly well executed piece of comedy, captivating spectators so much so that my cheeks hurt from laughing. Schamaun also, (in total contrast) performs for children, details of which can be found here. 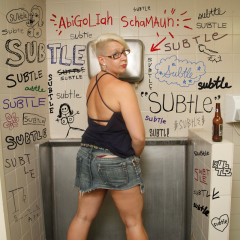