I went to see the Hampstead Murder Mystery at the behest of Jo. I'm glad she asked me to.

It was difficult to capture all the action because of purely how packed the audience was. But this also serves as a comment on how promising they are. The murder mystery took us through most members of the cast and analysed their potential culpability as the killer in an An Inspector Calls kind of way. The comedy they brought to the play was childish yet original and quite above what I was expecting from a youth theatre group. They parodied the theatrical shock stare through the fourth wall but didn't overuse it. The accompanying comedy piano or violin screech stings made it all the funnier.

They took us through vast mansions and around about Hampstead using just the five or six walls they tipped over and scurried around. In spite of what seemed liked a few malfunctions the lighting was very effective to create false drama and tension. The costumes were also very expert, working with the rest of the set design to affix the cast firmly in the late 19 th, early 20th century period. For this reason, the design deserves every praise – simple yet impressive.

The performances were, like I said, above and beyond what I could've expected of actors of their ages. Comedy is both the hardest genre to write and perform and for these thespians to have effectively done the latter with nuance and originality is very commendable. Forgiving the odd dodgy cockney accent, the cast of Hampstead managed to create comedy and execute it perfectly well as well as plant us into another time period and execute it, perhaps, even better. 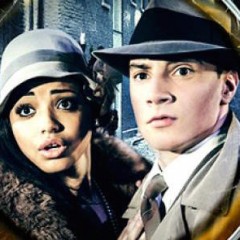 I went to see the Hampstead Murder Mystery at the behest of Jo. I'm glad she asked me to.