Prometheus brought us fire, but this play brings us Io – the forgotten and discarded woman in the story.

Being a footnote in someone else's story seems to be Io's fate. She is an object of Zeus's admiring gaze, with visions forced upon her, then the object of Hera's vengeful gaze, turned into a cow to escape the anger of the Goddess. Prometheus Bound (Io's Version) is exactly what it says – Io's version. And yet it is so much more, it is humanity's version, and it is women's version.

This beautiful and powerful play tells the story of both Io and Prometheus. Prometheus is an elusive figure; a Titan, punished for disobeying Zeus, lost in the future (which allows for funny references to modern inventions), and waiting for Io's descendant to save him from his fate. Io is a Priestess who does not have time to wait for fate. She wants to control her own destiny. A highlight moment of the play was when Io and Prometheus argue about the nature of fate, and the role of women.

Full of powerful lines and movements, this play speaks to the nature of the female experience. Io yells to Prometheus: "so I have to endure, but [Hercules] will have endurance." Her righteous anger shines through, and the actress must be commended for the emotions she manages to portray in this single line. Through Io's whole story the audience are shown how women must suffer terrible trials such as childbirth and rape, and yet it is only men who are labelled as being "strong" or "brave." Men do things, but women have things done to them - they are passive characters in their own lives. The play is honest about this, but also attempts to end on a more hopeful note. Io accepts her fate, but also decides that she still wants be more, and wants to experience life. It is bittersweet, and it is tragic.

Three ocean nymphs take on the role of the Chorus, breaking the fourth wall to speak the the audience, inviting us into the story. Their characters are unique, and add some much needed humour, balancing out the heaviness of the content matter. One nymph is flirtatious, one is angry, and one is ditsy - together they are a wonderful breath of fresh air.

The play had a little of everything – comedy, feminism, anger, commentary on humanity. A clever discussion about Prometheus bringing humans fire was intertwined with one about the inventions, but also the destruction, that humanity has wrought upon its world. Despite a sparse stage, with only five blocks and a set of chains as their props, a wonderful story is painted. Interpretive dance, meaningful lines, and interesting backing music adds depth and quality to the show. 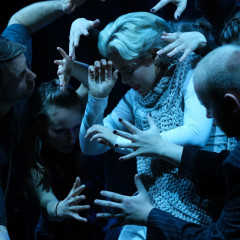 Prometheus brought us fire, but this play brings us Io – the forgotten and discarded woman in the story.