The forgotten and wronged women of the 1660's London theatre scene are here to finally tell their story.

Who will play the role of Desdemona in Killigrew's production of Othello? For the first time, a London theatre is considering using a woman to play a woman – a scandalous notion, destined to bring shame or notoriety beyond belief. This play follows the story of the two women vying for the role of Desdemona, exploring female representation and patriarchal stereotypes.

On a small stage, in the space of only one hour, the cast of The Actress discuss the values of success based on merit versus fame, and the dichotomy of the "Madonna-whore" archetype. Anne Marshal, the first woman on the stage, is timid and young, but a brilliantly honest and raw performer. She plays the role of the saintly "Madonna". Margaret Hughes is the older, more sexually promiscuous actress, who lacks the acting promise that Anne exudes. She plays the "whore". So, who deserves the limelight – the talent or the spectacle?

But this show quickly becomes so much more than a competition between women. It's clear that both are confined to their roles as dictated by a patriarchal society – a society which cannot understand how innocent girls can also be exciting on a stage, nor can it understand that promiscuous woman is capable of developing serious acting skills. Both Anne and Margaret want success, but their stories are not their own to write.

The play cleverly redefines "lying" as simply "reframing history", when calling Margaret the first woman on stage and denying Anne her place, falling into an all too familiar narrative. Anne becomes a footnote in history, all because she was not physically entertaining to men, but this play brings her voice back to centre stage!

Both characters were phenomenal, though the way in which Anne was brought to life must be commended, as she instantly drew empathy from the audience. Heartfelt speeches and emotional turmoil left us rooting for her, despite knowing that there was no truly happy ending in sight.

Whilst there are a few comedic lines from the best friend of Anne, this play is, for the most part, honest and serious. Its excitement comes from the powerful acting and messaging. When Margaret says "women must adapt or die", she exposes a deep truth of the 1660's which perhaps resonates in some ways to this day. 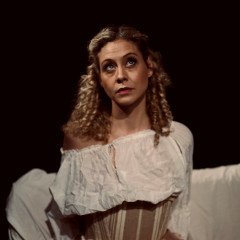 The forgotten and wronged women of the 1660's London theatre scene are here to finally tell their story.