I feel like I’ve seen Almost Adult before. It’s difficult to put a new spin on the coming-of-age story, of innocence to experience, of regional bumpkin to city slicker (yes, roll your eyes), and the harsher realities of an unkind world beyond the front door of one’s family home.

Northerner Hope (Charlotte Anne-Tilley) ventures south to London to find a job and gloat to her friends that she’s escaped Macclesfield. Her name tells us everything we need to know about her persona and there’s little else to find out. She’s relentlessly optimistic, out-going, happy, and she likes the London Underground. But when she joins a seedy bar called Dino World to pay the rent, we see her spark begin to flicker as her fervour for the capital wanes.

This one-woman play about almost growing up is almost great. Like the baggy dino costume Anne-Tilley makes the most of (a compulsory stipulation for the employees of Dino World), the play bunches around our feet and fails to hit the ground running. This is a shame as the story, which grapples with misogyny and sexual assault, is an important one that prods at the legacy of the 2017 #MeToo movement. Did the moment mobilise change? If so, has the workplace evolved to reflect this?

The play’s conclusion that, in many ways, nothing has really changed since #MeToo should be taken seriously. Anne-Tilley's well-observed writing of workplace drama and Tinder-swiping feels true to life. Unfortunately the characters are drawn in 2-D, initially for laughs or to keep up with Hope’s overblown, shiny, pop version of reality even as it fails to materialise. We lose some of the sinister nuance of the most morally reprehensible of the characters, since they fail to develop beyond their caricature.

At risk of sounding like I’m part of the ‘Not all men’ crowd (a male apologist’s poor excuse for wiping their hands of the problem), I wonder if the play might benefit from a short scene with a minor male character - perhaps Hope’s father, who has two lines and is joyfully, utterly useless - as a foil to the exclusively condemnable men Hope otherwise encounters, if only to heighten the predatory, prehistoric male attitude of places like Dino World and beyond. It would be easy to come away from Almost Adult and believe that sexual assault is not a problem for men to stamp out and only for women (to say nothing of the gender spectrum). I really hope the conversation has moved on since then.

An excellent, muted scene in the final act does away with happy, bouncy trampoline acting to deliver the long-awaited introspection Hope spends a good portion of the play neglecting. It’s a great bit of HR-speak that collapses the discussion about workplace malpractice into a potential legal dispute that forgets to put the human in Human Resources.

Perhaps the most depressing part of the story is that we know exactly what’s about to happen next at nearly every turn. To Anne-Tilley’s credit, the dramatic irony is wielded deliberately and the show does a decent job of reading the room. We anticipate the plot because we’ve seen it on the news or heard from a friend or loved one. Because of this, Anne-Tilley can afford to be more guileful in U-turning the audience’s expectations.

Almost Adult is enjoyable, true to life, and touches on essential themes that require constant re-tellings to reflect where we are post-#MeToo. Anne-Tilley's performance carries the show and there's plenty of promise in here for the future. 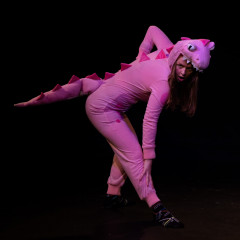