Long-form improv thrives on incongruity, chance, and mishap while also trying to deliver some semblance of a story. It’s usually a bit hit-and-miss for this reason. Loosely based on the sci-fi series Star Trek, the improv crew aboard the Starship Improvise run an improbably slick operation. Rising to the challenges of the genre, this well-oiled joke machine cruises along at warp-speed and fires off gags that hit their target more often than not.

Remarkably, the show doesn’t sport the usual battle-weariness of an outfit making it up as they go along. Bold character choices and the whiff of the odd in-joke or self-sabotage keeps dialogue interesting despite the limited input from the audience. Once the audience’s suggestions have been fielded, the show starts promptly and barely looks back. The framing device of a Comic Con panel taking questions from the audience about the favourite episode is a brilliant solution to the dull, protracted comedy patter that kicks off every improv gig. I wish every long-form improv show was this savvy about its own obstacles.

You can tell the improv has been rigorously stress-tested in the rehearsal room, as the cast deliver a fairly sound three-part structure that has the feel of a complete story, even when the plot is entirely ridiculous and makes little to no sense whatsoever. In the episode I saw, an ingenious body-swapping narrative where pain is felt by one crew member but not the other turns into an entertaining comedy of errors - a good bit of fun for Trekkies and laymen alike. It’s a fabulous idea by the cast who fleece the audience into taking credit for the show.

The only criticism I can muster, which may sound an entirely unfair on the face of it (though I’m happy for you to dismiss the criticism for being so) is that I can’t help but feel a little cheated by how smoothly everything goes. Each scene rolls into the next, largely without a hitch, while the cast does their best to dodge the random factor. It’s wildly impressive, but if I wanted to watch a substandard play with no internal logic I’d go and see Mamma Mia! the Musical.

In all good improv, you expect things to go wrong. My favourite parts of Starship Improvise were not the gags and well-timed call-backs, of which there are plenty, but the mistakes that are ‘Yes and-ed’ into further mayhem. Watching long-form comedy you want to feel like you’re cheering on a unicyclist who’s juggling antique glassware and flaming knives. The thrill is in the potential, or at least the illusion, that they could crash and burn at any moment. Then we go bananas for it when they don’t.

There’s just enough chaos in Starship Improvise for it to feel like it’s not flying on autopilot. The cast are outstanding and I think a lot of improv shows could learn a thing or two from this expertly produced genre parody. A brilliant and consistently funny show that can risk going more boldly where it’s already gone the previous night. 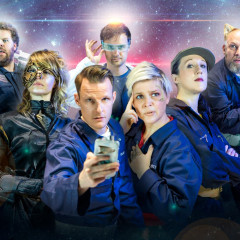