A horrifying, knock-out show about hate and radicalisation

There’s always one fringe show each year that rises above the rest to haunt you at the core of who you are, the sort of show that petrifies you into silence and stalks you like a shadow well after you leave the theatre. Don't be fooled by the enthusiasm of the exclamation point: Rocky! is that show.

I haven’t seen the original Stallone film or any of the subsequent sequels about the down-on-his-luck boxer Rocky Balboa, the ‘Italian Stallion’ who jogs the stairs of success, like in that famous ‘Eye of the Tiger’ training montage seared in the cultural psyche. He’s an underdog, a loser outsider who holds his own against Apollo Creed, a champion boxer and out-and-out favourite in the ring. Creed clothes himself in red, white, and blue, sporting his trademark ‘stars and stripes’ shorts and the arrogance of a man backed by industry elites at the top of his game. Creed is also black.

As actor Morten Burian recounts the story of the films, an unbearable, high-pitched noise rings throughout the theatre. ‘A huge black man, with beautiful black muscles,’ says Burian, describing Creed. It's an odd thing to say. Other strange phrases and fixations follow. I realise now that we’re departing from the script and a sensation of panic takes hold as it dawns on me the tinny ringing noise piercing our ears is also a dog whistle. Rocky is ‘white trash’. To his fans, Creed is the liberal elite establishment, the race-obsessed oppressor keeping them down. The process of radicalisation happens gradually, almost imperceptibly. It's genuinely terrifying.

A scene in which Rocky pummels a pig carcass in a butchers shop, venting his frustration at a world which underestimates him. ‘I am the pig,’ says Burian, gesturing to the dead pig he dragged from the wings now hanging from the rafters. The animal is real, as far as I can tell. What follows is a gruesome show of physical and metaphorical violence that enacts the hate of a white man consumed by white supremacy. For Burian, this violence manifests as acts of self-harm and suffocation. I will never forget the size of the pig’s tongue hanging from his mouth. It runs the length of his chin down to his clavicle. He did not speak out against hate and now he cannot. The mumbled gagging sounds are sickening as he tries to tear the tongue from his face. It’s as close to traumatic as theatre gets.

Rocky! is an exceptional piece of award-winning performance art that goes beyond the pale. It’s disturbing to watch and I can’t stress enough the horror of the show. Yet even in its horror, the disgust it inspires matches the enormity of hate Burian takes aim at. Rocky! is offensive, it intends offence. I feel exhausted by the racism and I want it to stop. I want the show to stop. We should all feel like this, because it is too much to handle. I don’t know of any higher praise. 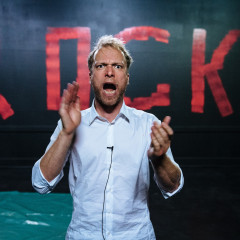 A horrifying, knock-out show about hate and radicalisation