Reginald D. Hunter is one of the comedy greats, but despite his reputation, this is the first time I’d seen him live.

Greeting the crowd like old friends, Reginald’s Bombe Schuffleur was a rollercoaster of a ride. Selling out the Assembly Rooms Ballroom, Reg walked on the stage as if he’d been waiting his whole life to be in front of a live audience again. And with three bottles of water to his side, I knew we were in for quite the night — he didn’t disappoint.

From finding out he had a 19-year-old daughter to losing his dad (who sounded like a great man by the way) Reg caught us up on what life’s been like for him since Covid.

A natural-born storyteller with a bold stage presence, Reg performed his show with the kind of finesse that only comes from doing comedy for as long as he has  – a truly well-seasoned performer.

You might say some of the topics Reg reached for were low hanging fruit: Meghan Markle, Prince Andrew, Brexit, but in Reg’s hands these jokes were fresh and hilarious. Reg had won the crowd over instantly – he could have said anything and the crowd would have left with hooks in their mouths.

Case in point, halfway through the show, things took a dark turn. Telling us a story about an estranged friend the room got really tense and I couldn’t tell where he was going with the story. I had no reason to worry because once Reg delivered the punchline, and punch us it certainly did.

There were parts of the story that felt a little disconnected. Like he had so much to say he just wanted to get it out, but I didn’t mind it. In case I haven’t made it clear, Reginald D. Hunter is fun company to keep.

Bombe Schuffleur is playing daily at the Assembly Rooms Ballroom at 21:00. 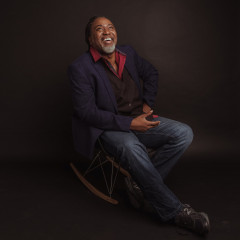