Voice MagReviewsGhosts of the Near F…

A haunting Wild West of misdirection, nuclear physics, and the end of the world

‘Are you watching closely?’ A budget-Donny-Darko rabbit the size of an adult human stares at the audience. There’s a diorama of Las Vegas projected onto a screen. Maybe this is a magic show. It certainly has the foreboding timbre of a man preparing to saw a woman in half. We narrow our eyes at the two performers onstage, sure of subterfuge, and tense ourselves for the reveal.

Ghosts of the Near Future is exceptionally written. Full of misdirection and genre-play, there’s plenty of narrative trickery at work here. It would spoil it if I told you the secret of the magic at hand, so I’ll do my best to tell you what the show is about rather than what happens. The distinction is important to emma + pj, who pull back the curtain on events which have not yet come to pass in this Americana-inflected séance about our future.

We follow a magician across the Nevada desert in this new Wild West. The landscape is a mix of post-war 1950s nostalgia - diners, show girls, the open road, a Chevy Impala - and set-pieces pulled from a Sergio Leone spaghetti western. This is a counterfactual world of cowboys and plutonium rods. The magician meets a preacher along the way, then a nuclear physicist. If this show is a disappearing act about the future, we begin to ask, then what has been lost and what can be saved? For now, like the rabbit in the magician’s hat or the physicist’s famous feline, we are both alive and dead.

There’s more than a touch of Vonnegut to this kind of purgatory. The waiting will test the patience of some audience members who will feel cheated by the premise, but the anticipation is part of the experience and journey of discovery (sigh, I know). If you like road movies, meandering tales of chance encounters, this will be up your street. With dextrous sleight of hand, emma + pj weave together strands of film, music, poetry, science, theatre and projection into a spectacular cat’s cradle of curiosity and intrigue.

All good magic tricks are a kind of self-delusion. They’re an over-imaginative story we tell ourselves about a world that falls short of explanation. Ghosts of the Near Future offers you nothing on a plate. It leaves it up to you to work out how the magic happens, by laying out bread crumbs from start to finish. It’s a risk, but one that whets our appetite for what turns out to be multimedia feast for the senses. 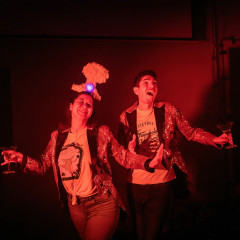 Ghosts of the Near Future

A haunting Wild West of misdirection, nuclear physics, and the end of the world