Elz, Jams, Toni and Jaime, are living in a hostel, each fighting their own battles. 'Rapsody' follows them facing the realities of our class system through live rap, trap and drill.

It’s a powerful idea, to use rap to say things that are difficult to speak out loud. Seeing these young people being so candid and vulnerable on stage was really powerful, as they navigated class, family and friendship. Middle class and strictly religious Jaime moves into the hostel, shaking up the friendship of Elz, Jams and Toni who’ve already been staying there.

The rapping was really incredible, so moving at points that it made me tear up. I’d never seen storytelling in this way before. But I couldn’t understand why this method of storytelling wasn’t utilised more through the play. It was definitively the highlight of the show, but each character only got one segment of individual time on the mic and I wish there had been more. Because the quality of the rap was so high, it made the normal scenes feel slightly directionless as they didn’t have as much intent or precision.

Within the rapping, discussion between Jams and Elz about the song verse and what each considers ‘real’ was so interesting, as Jams focussed on the system while Elz talked about sex, money and murder. I thought there could have been space for discussion around the idealisation of these things in rap from both perspectives, but the script moved away from this.

But beyond that, it felt like this show was written by young people and for young people, as it was innovative and ambitious. In sixty minutes, there wasn’t enough time to fully develop and understand the character. When the show ended, I couldn’t believe that it had finished already. I felt like I’d watched the first half of a show because the storylines felt unfinished, upon research, it does seem like this is a compressed version of the show, which makes sense because there was so much more story to tell

There needs to be more rap at Fringe and more show like this one, written by emerging artist and bringing a whole new audience to the theatre. 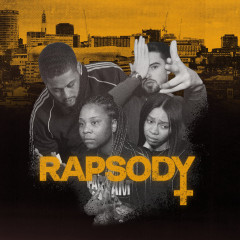 Elz, Jams, Toni and Jaime, are living in a hostel, each fighting their own battles. 'Rapsody' follows them facing the realities of our class system through live rap, trap and drill.