Nicholls and Brown bring their debut hour to Edinburgh Fringe, and there’s plenty to like!

Rosie Nicholls (NewsRevue) and Sullivan Brown (No Rolls Barred) are Nicholls and Brown, a new sketch comedy duo who take the audience on a weird and twisted journey of delight, disgust and bewilderment.

Starting on a very strong dance number, within the first 5 minutes you get a real sense of what Nicholls and Brown are going to be about, which is a mix of the cynicism of League of Gentlemen, with the warped mentality of Casual Violence, and a dash of whimsy akin to Sleeping Trees. Those are all solid inspirations, and the foundations that have been built from that are very strong.

While not every sketch elicited huge laughs, there were none that didn’t get at least a chuckle, and a few had the crowd in stitches. The laundry scene, for instance, was absolutely hilarious, while the networking one outstayed its welcome but had a great premise. It was great to see Nicholls and Brown clearly enjoy themselves on stage, at times desperately trying (and failing) to hold back the laughter. The duo have bubbling chemistry and a creativity that will definitely take them places. Every journey starts with that first step, and this was a confident outing for Nicholls and Brown, who I think will definitely be ones to watch over the next few years. 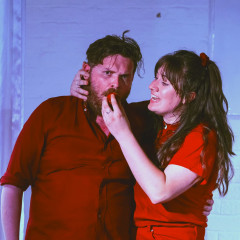 Nicholls and Brown bring their debut hour to Edinburgh Fringe, and there’s plenty to like!