Putting words in your mouth on a first date. It’s probably a red flag but they’ve got a great sense of humour, and anyway you’ve paid for entry. There’s plenty of laughter, some of it yours, but the majority is emanating from hundreds of people in the audience spectating your date as you sit at a table and attempt to woo a glorified sock-puppet. The puppet – a sweary little brown monkey – has a great personality. This is what you’re here for: 'The world’s first ventrilo-dating show.'

There’s no doubt Nina Conti is a singular talent. This time she’s gone beyond ventriloquism – possibly into the realm of madness, she says – to address the chimpanzee in the room. If the puppet’s the star of the show, what happens to the human attached to it? How far does that suspension of disbelief go? And more importantly, will the good people at the Edinburgh fringe consider speed-dating an off-the-shelf-looking toy animal worn like a glove?

It’s the sort of problem only a brilliant ventriloquist has to contend with (Conti cracks a joke at the huge screen televising her face overhead that this isn’t a show about technique: watch my lips, is the name of the game). Instead the dating show format is a wonderfully absurd romp through the best parts of her act, with the added frisson of match-making disaster. It has all the smut, cringe, gossip, drama, and unexpected wholesomeness of a sex-obsessed Channel 4 reality show crossed with the Muppets.

Mostly, the show is an enjoyably silly parade of singletons and re-enacted dates, in which audience members are fitted with remote control masks ventriloquized by Conti. Soon our volunteer amours are spilling strange details of their love life, bursting into song, wilfully embroiled in the chaos. It’s great fun, and the laughs come easy and stay for the whole show. Even Conti gets swept up in the voice-swapping, addressing Monkey as Nina in a slip of the tongue that'd give Freud a field day.

Speaking of Freud, the most fascinating part of the show recalls a bit by Conti from an improvised series of YouTube sketches between the ventriloquist, Monkey and a brow-beaten therapist. To really release the chimp within, Conti proposes climbing into a full body bag with a hole cut out for Monkey that conceals her entirely from view. In The Dating Show, the puppet pokes out of the amorphous lumpen sack on the floor and rattles through a queue of hopefuls Tinder-style. It’s a strange act of self-erasure for a comedian, to climb into a sack of their own volition in pursuit of anonymity, but it's liberating for a ventriloquist. She can move her lips however she likes. The disappearing act works: We forget that this two-way flirtation between Monkey and a junior doctor is really a three-way.

Strictly this isn’t ventriloquism anymore. I don’t know what it is. It isn’t even the funniest part of the show, but it is incredibly entertaining. 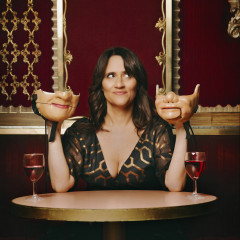