We’ve all undoubtedly had a rough night, but I’m willing to bet that it wasn’t quite as rough as this one was. Rough Night unfolds over four friends’ social media accounts where each friend is a piece of the puzzle; it’s up to you to solve it.

Produced by New Zealand based Tempest Theatre Co., Rough Night is a pre-recorded interactive theatre experience that will have you stalking the characters on social media in an attempt to uncover their stories and find out what happened at the end-of-summer house party.

The four characters, Liv, Jamie, Declan, and Sarah, are all distinct and largely well realised. Liv is disenchanted with her governmental job and sets her sights on pursuing an acting career in LA. Jamie’s the group’s self-professed lovable asshole, who suffers from an internal battle to resolve his insecurities. Declan is a musician who does everything but make music, and offers a shoulder to cry on for a friend post break-up, only to end up sharing a kiss. Sarah, the most fleshed out character, appears like a wild party animal but underneath the carefully curated image she posts online she has her own struggles; a break-up, deteriorating mental health and impulsive actions. She also disappears after the party, only to post a cryptic message to insist she is apparently fine.

The four characters are accurate representations of the characters you find in virtually any social group. What’s great about this is the characters are what you make of them and it’s all open to interpretation; Liv can be a starry-eyed dreamchaser or a terrible friend who is abandoning her best friend for example.

I did however feel as if some character’s developments were more fleshed out than others may’ve been. Sarah and Jamie, as the group’s party animal and loveable asshole respectively, do have layers of depth, Liv and Declan however feel one-dimensional in comparison save for one or two redeeming qualities. Granted, I may have missed clues but exploring their stories was much less interesting for me than Declan’s and certainly Sarah’s.

The plot is compelling but its resolution depends on whether you’re able to solve the puzzle of the play, which I’m convinced lies in Sarah’s password-protected blog that the audience is tasked with cracking. I’ve got as far as the password being a derivative of a character off the television series, Gossip Girl. This is a double-edged sword in that it adds a layer of depth in having the audience work for the answer, but can leave the viewer feeling unsatiated if they can’t quite figure out what that password could be.

I must applaud Tempest Theatre Co.’s use of social media as an out of the box vector through which to tell Rough Night. It adds a new dimension to the typical performance, acting as a canvas for the audience to interact with the show in a way that really plays off of this generation’s guilty pleasure of ‘stalking’ people’s online presence. It makes you feel as if you’re a proverbial ‘fly on the wall’. Rough Night is adapting to the capricious landscape of storytelling which exists now, which they largely do successfully.

The problem with this however is that it does rely on interactivity between the characters and audience. The website does encourage the audience to participate and engage with Liv, Jamie, Sarah and Declan - unfortunately, most of the interaction occurs between them, and the audience’s participation is limited. This is a shame, and one wonders if in this case whether it would’ve simply been better for Rough Night to be performed as a traditional play where it is not quite as reliant on the audience’s active participation. In its current form you risk walking away without a fitting conclusion to a decent story as parts are withheld behind puzzles and clues.

That said, Rough Night is an interesting, innovative and overall fun play and I commend the creator’s attempt at flipping what we think of a ‘play’, on its head - viewers are not spoon fed and one genuinely does get out whatever one is personally willing to put in. This is great for those who are willing to get stuck in and it will no doubt be a better experience for them. 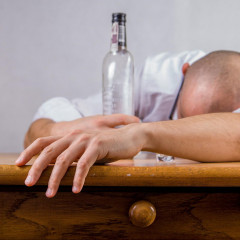 We’ve all undoubtedly had a rough night, but I’m willing to bet that it wasn’t quite as rough as this one was. Rough Night unfolds over four friends’ social media accounts where each friend is a piece of the puzzle; it’s up to you to solve it.