Singer/songwriter, producer, director, and social activist Freddie Fiction has decided to start 2022 with an unbelievable take-off. Releasing his first new single of the year, ‘Lie To Me’, matched with an electrifying new music video.

The British born singer/songwriter often opts for a fun and upbeat style. Buried underneath candescent pop hooks, usually lies a subtle, more serious meaning. Offering the listener a multitude of ways to listen, Freddie takes his songs to a much more creative and enigmatic level. ‘Lie To Me’ is no different, with its catchy, flickering chorus. At surface level, it’s a classic bright love song, sparking an emotional bliss. Buried beneath lies a somewhat sadder meaning, elegantly captured by the video, this love is a distant memory or even perhaps just a fantasy. Trapped in a dark place, the narrator uses this love as a driving force to keep going, even if it is just false hope.

Talking about the music video for the single, Freddie talks about the disparity between the shot locations, “The music video shows a pilot crashing into the snowy peaked Himalayan mountain ranges. He knows that he is hundreds of miles from civilisation, and out there in the cold without provisions, he will likely die. However, in his mind, he conjures up an alternate reality. He visions himself on a sun-drenched beach with a beautiful woman (perhaps the target of his affections). In the end, as the snow falls around him and it's getting dark, the temperatures drop to below freezing. He settles down and closes his eyes with a smile because, in his mind, he is somewhere else and happy. The last shot is of the two of them together at the sun-drenched beach. Did he die on that mountain or did he make it out to reunite with the girl? That's for the viewer to decide.”

Freddie Fiction’s latest new single ‘Lie To Me’ is out now on all available streaming services: 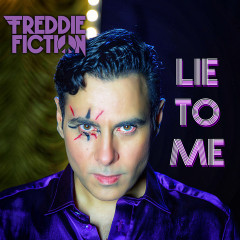 Singer/songwriter, producer, director, and social activist Freddie Fiction has decided to start 2022 with an unbelievable take-off. Releasing his first new single of the year, ‘Lie To Me’, matched with an electrifying new music video.