Heartracer drives us home with a stunning release, that will have you craving more for the alt-rock band.

Heartracer is an alternative/pop project formed by brothers Chris and Chip Cosby. The name was derived from Chris' tachycardia diagnosis, a disorder which causes the heart to beat faster at random intervals. Combining modern production methods with the classic pop songwriting reminiscent of simpler times, Heartracer's sound is that of anthemic grandeur. Unabashedly drawing on inspiration from the pop icons of the past such as Tears for Fears and Aha, their sound provides a wide ranging pallete of interwoven synths, guitars, and swooning vocals that ultimately embalm the listener with nostalgic synth magic. Joined by Wes Tatum on the bass guitar Heartracer has performed with several internationally known artists such as Walk The Moon, Third Eye Blind, The Night Game, Future Islands, Joywave and many more. Heartracer has worked with the producers of M83, St. Lucia, Passion Pit, Beck, and Jukebox The Ghost. Heartracer has just completed work on their brand new full length album "The Feel."

The band shares of the single and new release:

"The Feel" is our first album since In Flight was released back in 2013.  The first single "Text Me Back" is the centerpiece of the album in terms of its message and sonic nature. In many ways the vintage synths and anthemic nature people have come to expect of us is grander than ever but in many ways took a back seat to the story we wanted to tell. A story that only with a full length LP we could tell.  Many of these themes are ones that almost every human being dealt with during the pandemic are explored, and in particular that feeling of vulnerability makes this single and album very special to us. In the chorus Chris sings ""I used to know what you were going through love, I used to hold your hand when you were wide awake, we used to have something to talk about, now I don't even know what I'm supposed to say."  As a band we feel we really have now grown into a place where we finally have discovered what we want to say and this song and this album is it.
Header Image Credit: Heartracer 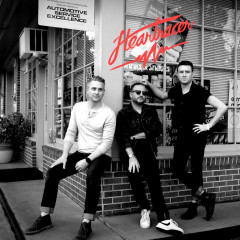 Heartracer drives us home with a stunning release, that will have you craving more for the alt-rock band.