The Newcastle-under-Lyme legend is back again and this time he’s taken over the stage.

The marvellous life of Neil Baldwin has previously been translated onto the screen and adapted as a book, but it is this stage show that has encapsulated the essence of Neil the best. A genuinely hilarious and heartfelt production, ‘Marvellous’ is the most enjoyable thing I’ve seen in years – not just at the theatre, but across film and television as well.

‘Marvellous’ commences with a cast of six different Neil’s, who are about to tell his story in an extremely theatrical and convoluted way. You fear for a second that this is going to be an exercise in am-dram, until, suddenly, a spotlight shines into the audience. It is the real Neil, played by Michael Hugo, who takes charge of the play – true to real life in this aspect.

We are taken through Neil’s life chronologically, with Real Neil assigning this company of actors different roles from different stages of his life. Each memory, from his parents’ first date at a Stoke City football match, to his tenure as a circus clown, is marked distinctively. The theatre-in-the-round contains no set, so the production leans heavily on props, lighting, sound and the actors’ performances. All of these elements are utilised perfectly, transporting you to the mentioned place in time – a testament to the director Theresa Heskins.

You can tell this is Neil’s play, however. From his presence at rehearsals, to casting Hugo as himself over half a pint in the bar unknown to anyone else, the success of this play is down to Neil being able to convey his own experiences.

Michael Hugo is also the perfect Neil. He embodies his natural kindness and humour with ease. It would be very easy to overplay a character like Neil in a theatre setting, but Hugo keeps his performance calm, whilst ensuring the audience is hanging onto his every word.

Each member of the cast stands out. Suzanne Ahmet who mainly plays Neil’s mother, connects with her son beautifully, their relationship the heart of the performance. Yet, Ahmet can also become a Welsh ringmaster laced with confidence and cruelty. Gareth Cassidy’s range of accents is a delight, and Alex Frost and Jerone Marsh-Reid’s commentating duo is electrifying.

The production is never twee, self-aware of its more slapstick elements, making it a pure joy to watch. This play is special, not only because it tells Neil’s story, but also because of the way it represents Stoke. In other films, TV or theatre productions set in the area, the accents are approached lazily, drifting into generic northern – ‘The Colour Room’ I’m looking at you. ‘Marvellous’ never does this. Accents are spot on and it is a pure celebration of an area that does not get much positive press.

Thank you Neil for bringing happiness into the New Vic Theatre, and filling a whole audience with joy for an evening. ‘Marvellous’ is running until 9 April, and I would highly recommend seeing this production before it is over, regardless of which part of the country you come from. It’s so good I’m considering seeing it again. 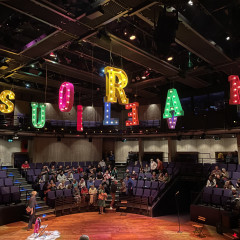 The Newcastle-under-Lyme legend is back again and this time he’s taken over the stage.