The former Labour leader is set to host a series of events taking place in Glasgow and Edinburgh in order to promote more "radical and rapid" climate action.

Jeremy Corbyn has announced plans to stage an 'alternative COP26' from the 8th to the 11th of November through his Peace and Justice Project.

The endeavour will see four events taking place during the final days of COP26, three in Glasgow and one in Edinburgh. The Glasgow demonstrations will take place at Websters Theatre.

One of the events will be a "climate justice cabaret", which will group together a number of artists and musicians to boost the morale of activists.

There will also be "conversation-style" talks, along with panels of trade union leaders.

The Islington MP has decided to host the events in order to provide a voice for those who believe that the delegates and politicians attending the real COP26 will not be proposing the radical changes that the majority of scientists say are necessary. The pledges made during the Paris Agreement are not considered to be substantial enough by many scientists.

With attendees like Australian PM Scott Morrison set to participate in the talks, it is difficult to assuage these concerns.

Corbyn emphasises the importance of his COP26 by arguing that:

“We need radical and rapid change to our dangerously broken and destructive political and economic system. Our future is being stolen from under us by a coalition of big polluters and big banks, propped up by weak politicians too scared to take them on.

“I can’t wait to be in Scotland during COP26 to add my voice – and more importantly raise up the voices of others – to propose radical and rapid change.”

He went on to describe climate change as a "class issue", and an example of "international justice." He says: "Those who have done the least harm suffer the most and the first.” 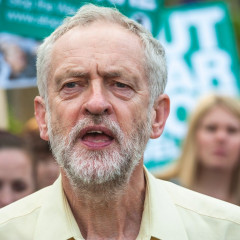 The former Labour leader is set to host a series of events taking place in Glasgow and Edinburgh in order to promote more "radical and rapid" climate action.