Sadiq Khan has pledged to “reignite” London’s cultural sector after the pandemic, according to The Stage, announcing a major tourism campaign as he is re-elected mayor for a second term.

The signing-in ceremony, which took place at Shakespeare’s Globe, saw the mayor launch the biggest domestic tourism campaign London has ever seen, aimed to kick start the capital's economy and recover the collateral damage left by the Covid crisis.

“Art and culture is what helps to make this the greatest city in the world. After an extremely difficult time for the art and creative sectors, I look forward to our theatres and cultural venues opening up once again,” Khan said.

He promised to deliver “a better and brighter future for London” by reinvigorating hard hit sectors such as entertainment and hospitality, making “jobs, jobs, jobs” a priority. Additionally he aimed to support the cultural institutions that had “suffered much” by launching the Let’s Do London  campaign, that will announce that “our capital stands ready to entertain, inspire and enthral once again”.

Khan has committed £6 million to public art installations, programmes of special events and major advertising campaigns. The theatre scene will be kickstarted with West End Live and a tickets scheme called Kids Week that will allow children to attend shows as a part of Let’s Do London.

Further plans are to be announced that will partner with other organisations such as the National Theatre, English National Opera, The Royal Albert Hall, the Southbank Centre and many more.

One such plan is London Lates, which consists of a series of late-night events and extended opening hours at cultural institutions.The Globe will stage a line-up of midnight matinees – with performances beginning at 11:59pm – as part of the programme, which also includes late-night outdoor film screenings and outdoor performances from the Royal Opera House.

“The work begins anew today, to reignite our city, and to kick-start our economy as London continues to open up,” Khan said. 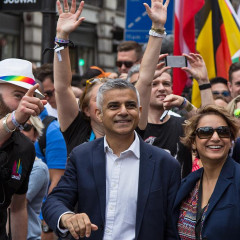 Sadiq Khan reignites London with culture at its core