Voice MagNewsNew trailer for the…

The film adaptation of the musical by Lin-Manuel Miranda and Quiara Alegria Hudes is to be released earlier than planned.

The new ‘In The Heights'  trailer confirms that audiences won’t have to wait long before they can enjoy the film adaptation of the Tony-winning musical. Director Jon M. Chu took to Twitter to announce that the movie is now set to premiere on 11 June this year.

“Surprise. We coming [sic] to Theaters one week earlier!!! There has been so much demand since our trailer release this week that we decided to get it out to you sooner. Let’s gooooooooooooo!!!! See you soon.” Chu tweeted.

With released dates pushed back, theatre productions currently suspended, and films forced to find new online streaming platforms for their projects, it is no wonder this news is received with enthusiasm.

In the Heights follows the story of Unsavi, a Washington Heights bodega owner who undergoes trials and triumphs alongside his vibrant neighbourhood. It originally opened on Broadway in 2008 and premiered at Southwark Playhouse in the Uk, before winning three Olivier Awards at the King’s Cross Theatre.

The film adaptation features a screenplay by Quiara Alegría Hudes – who wrote the musical’s book – with music and lyrics by Hamiltons, Lin-Manuel Miranda. This Hispanic classic features a cast led by Anthony Ramos (Hamilton, A Star is Born) as Usnavi with Corey Hawkins (Six Degrees of Separation) as Benny, Melissa Barrera (Vida) as Vanessa and singer-songwriter Leslie Grace as Nina.

Musical theatre lovers patiently await for more classics such as In the Heights to be released this year, filling the void that has been left by the pandemic for all things theatre, film and live productions.

The film should be available within the Uk later in June, but more information will be released closer to the date. 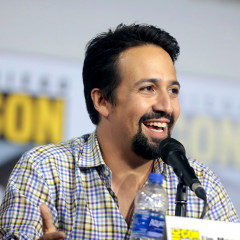 New trailer for the In the Heights released

The film adaptation of the musical by Lin-Manuel Miranda and Quiara Alegria Hudes is to be released earlier than planned.