Out of Chaos take home the award for their simply incredible spin on ancient Greek mythology.

We are proud to announce that the award for Voice’s Best Newcomer to Brighton Fringe Award 2019 goes to Out of Chaos for their energetic and exhilarating retelling of Greek mythology, ‘Unmythable’.

A mix of sketch, music and clowning, Out of Chaos offers a modern perspective (and a dab of critique) in their dynamic regaling of Greek myths. From the Trojan horse, to the creation of the seasons, all of the best stories are reenacted for the argonaut audience, and Out of Chaos should be commended for their ability to make them accessible to all ages.

When reviewing ‘Unmythable’, Voice’s editor Tom described the show as “a masterstroke in adapting legendary tales and myths,” and praised the effective use of simple props and stage dressing.

Speaking at the award ceremony,  Hannah Barrie, who played Beta in Out of Chaos’s award-winning show, accepted the prize on behalf of the production: “It’s been lovely to work with three strong women telling excellent stories.”

“It’s wonderful. We’ve worked really hard and we’re really passionate about the show. It’s just been a great experience being here; it means so much.”

Three shows topped made it to the final shortlist for the award, all of which were female-led productions:

Keep checking back as we will have interviews and more news from the ceremony in due course!

You can read Tom’s review of Unmythable here. 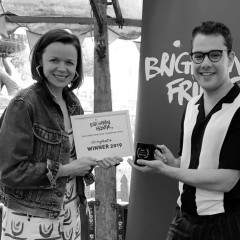 Voice’s Best Newcomer to Brighton Fringe 2019: Out of Chaos

Out of Chaos take home the award for their simply incredible spin on ancient Greek mythology.