OK Google, tell me about Pixel!

Google yesterday took the cover off two new smartphones, a home assistant, a new wi-fi router and more, in a bid to plant themselves as the company that can help users with their everyday lives.

A lot of what was announced had been previously discussed during the Google I/O keynote, but Google were finally ready during this keynote to offer more concrete details.

The overall presentation of the event felt rushed in places, and at times quite awkward and stilted. However, it was clear that they were serious about the hardware and software working together, and appear committed to achieving the goal.

The company was also not afraid to take a couple of lighthearted jabs at their competitors, namely Apple. More than once did one of the speakers make a joke at Apple's hardware - for example the camera bump and the headphone jack.

Below are all the big announcements made during the presentation!

The Pixel and the Pixel XL are the new phones by Google, and there was little here that wasn't previously leaked. These are however, the first Google branded phones, as opposed to their previous Nexus line of phones, which carried the manufacturer's name in the branding, for example LG and Huawei. The phones are 5inches and a 5.5inches respectively, and other than battery size and screen pixel density, have exactly the same specs. They will both come with Android Nougat (7.1) with an 8MP front facing camera and 12MP rear. It supports fast charging which will give 7 hours use with just 15 minutes of charging, and are the first phones to have Assistant built it, and also the first to support Google Daydream.

Daydream, first announced at Google I/O, is the platform from which Google hopes developers will build virtual reality experiences. Daydream View is the headset they have created to help expedite that process, and give an idea as to what a VR headset should be like. It is 30% lighter than similar headset devices, and has a fabric design to make it more stylish and comfortable to wear - it comes in three different colours. It also comes bundled with a controller, and there are 50 apps available at launch, with hundreds more expected over the coming months. When does it launch? November, and will cost £69.

Also announced at I/O was Google Home, although not a lot was mentioned subsequently. Now we have a price and a release date… for the US. The Home will launch in November for $129. But what does it do? Google Home is very much like Amazon Echo, in that it is a device that sits in your house, and listens to you when you activate it, so that it can assist you. For example, you can bark a command at it to play music, calculate weight conversions, order an Uber, give you a rundown of your calendar, get it to add an item to your shopping list (and have it sync across to your phone) or give you information about any given topic. It can also control Internet of Things (IoT) gadgets, such as Philip Hue lightbulbs, or your Nest thermostat. It will send a video across to your chromecast, and allow you to control it with voice commands. The device can do a lot, but it underpinned with Google Assistant, which has the potential to make it infinitely more powerful as that AI develops. It just isn't coming to the UK yet…

Another thing first announced at I/O (are you seeing a trend), Assistant is where Google is really laying its cards on the table in terms of where it believes technology is heading - Artificial Intelligence. Software that understands natural speech and responds likewise. Software that can pull all the information from your digital footprint and identity together to have the best insight of you as a person, and be able to proactively serve up this information when needed, without you thinking about it. Intelligence that sits alongside you in day-to-day life, and makes it easier for you just get on with things. That is the future Google is one day promising, but from what we saw yesterday, we are a long way off. Assistant is already available to try in demo form in their recently released Allo app, and comes baked into their new phones and Google home.

Google wasn't done there though, they also released some more hardware for your delectation. The first, as shown above, is Google Wifi. It is a simple unintrusive router that can be set up and controlled with a smartphone app, and allows you to stop the wifi to certain devices - for example, if you wanted your child to come off the iPad and have some family time. You can also purchase more than one, and they will work together to create a network mesh - allowing better coverage throughout your home.

They also announced a new Chromecast, which has been something of a darkhorse for Google in terms of hardware. Previously selling at £30, Google has now sold over 30m of them worldwide, and with Chromecast Ultra, are hoping to capitalise on that prior success. The new Chromecast can stream 4K content, and supports HDR - both HDR 10 and Dolby Vision. It has an ethernet port built into the power supply, and is 1.8x faster than the previous device. It will set you back £69 though when it's released in November.

I also live tweeted the event, and if you want to flick through those tweets, they are embedded for you below. 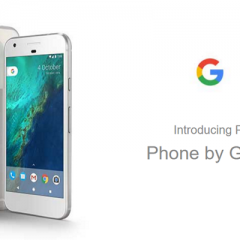 OK Google, tell me about Pixel!