Apple announced their latest flagship phones at the start of the month, Google ends September with theirs

The Nexus series of phones have always been a little bit different. What started out as a developer reference programme slowly gained mainstream appeal, culminating in the hugely popular Nexus 5, released in 2013.

The main appeal of the Nexus phones is the price, with flagship features coming in at a fraction of the price of competitors. The Nexus 6 bucked that trend a bit, but on the whole, cheap and powerful phones for all! There was also the promise of quick updates to the unfettered Android operating system. Want a pure Android experience, just as Google designed it? You get a Nexus.

This year, Google fans are spoilt for choice, as two new phones have been released. That wasn't the only hardware announcements made today, but perhaps the one everybody was after.

One thing that was odd was the pace in which the presentation was conducted. The presenters all lacked the comfort and charm of Apple presenters, although

Google is bucking its usual trend of just releasing the one phone, instead opting to release 2 different phones, in different sizes and from different manufacturers. Both of the announced phones have USB type-C ports, which is a newly introduced port, and currently only used in the most cutting edge technology. Both also have fingerprint scanners on the back, which for some reason has a brand name - Nexus Imprint. They also return to a price that undercuts that of their competitors, after the sluggish sales of last years Nexus 6, which was priced twice that of the Nexus 5.

The first is the Nexus 5X. It is a 5.2 inch phone, and is being manufactured by LG. This will be the third Nexus device make by the Korean company, having previously overseen the creation of the Nexus 4, and the highly successful Nexus 5. The 5X appears to be taking many design cues from its forefather, with a rather utilitarian design, and holds some resemblance to the old Nexus 5.

The body, like the old Nexus 5, is made of plastic, although looks softer than the 2013 model. There is now a bump for the improved 12-megapixel camera, which has "very large" pixels, perfect for capturing images in less than ideal conditions. It can record in slow motion, and also shoots in 4K. Don't be expecting to shoot too much footage if you buy the base model though, as it still comes with 16GB storage. It is slightly more forgivable than the new iPhones though, seeing as it starts at a more wallet friendly £339. You can double the amount of storage for £50 more.

It comes in 3 colours, Carbon, Quartz and Ice, and will be shipping in just over a month.

The promotional video for the newly announced 5X is available below

The Nexus 6P is a much more interesting device, for a number of reasons. Firstly, it is the first Nexus device made by Chinese manufacturer Huawei, who so far has had a reasonably muted success in the UK. Secondly, it is the first fully aluminium Nexus phone, coming in 3 colours and starting at 32GB storage.

It has a WQHD AMOLED display, which is more commonly known as 2K, and takes up roughly three quarters of the front of the device. This allows the phone, which has a 5.7inch display, to take a similar form to a 5.5 inch phone, for example, the iPhone 6S Plus. There is an 8-megapixel camera up front, making selfies all the more clearer.

The camera on the back is a 12.3-megapixel, laser focusing sensor, which can shoot in 4K, and capture slow motion at 240fps. They did photo comparisons to the iPhone 6S Plus, and the Nexus 6 from last year, and as you might expect, the 6P outperformed both.

The 6P also benefits from the new fingerprint scanner and USB type-C charging, which supports quick charging. This means the phone will charge at roughly 50% the speed of an iPhone 6Plus.

The promotional video for the 6P can be watched below

When released in 2013, the Chromecast was marketed as a cheap streaming stick, allowing Google to infiltrate the front room with an easy to use, easy to support device. 2 years later, and it is ready for a refresh.

Continuing the theme of twos, Google announced two new devices. The first is a refreshed Chromecast, which has morphed into a disc shaped device, and seems to have been designed to just hang out the back of your TV. It now has three dual frequency antennas, meaning it can support the faster 5Ghz network in addition to the more reliable 2.4Ghz. Google has also got its paint can out, and the new Chromecast comes in black, or the "fun" alternatives: Lemonade and Coral. That's yellow and red to you and me.

The second device, which looks incredibly similar to the first, is called Chromecast Audio. Simply put, it is a way to turn existing speaker systems into Chromecast enabled ones. The device, which has grooves reminiscent of a vinyl record, allows you to push audio to the speakers the same way you would to a TV. It supports RAC, optical and the traditional 3.5mm headphone jack. It has exactly the same pricing as the normal Chromecast.

The Chromecast app has also become more useful, with a complete redesign. The new app has remote control functionality, meaning any iOS or Android device will soon have the ability to control the content on your TV. It has a new unified search system, so when you search for, let's say, a TV show, it will display all of the places you are currently able to watch the show, include pricing options, or the ability to watch it immediately if it's on a streaming service like Netflix. It will only show you apps that are installed on your phone, so the content is immediately available should you choose to select something.

Gaming was mentioned pretty briefly, and essentially all the processing power will be done on your phone. iOS and Android is supported, so everyone who comes round will most likely already have a controller. It isn't just a case of screen mirroring either, experiences are tailored for both screens. Games will have access to the full range of phone sensors, from accelerometer, microphone, and even camera. Personally, this feels a more eloquent and natural solution than the new Apple TV, but time will see which wins out.

Google Photos is only 4 months old, and already people have uploaded 50 Billion photos and videos to the service. Today, Google announced three new features which should make the service even more appealing to people.

Although the sharing options for Google Photos is really good, there wasn't an option for people to jointly make albums. This meant that if you and friends all went to a party, there wasn't one central place where all the photos you took could be viewed.

Google has now rectified that, and you can invite people to add photos to any album with just a few clicks. Equally, if you want to share an album with people, but they have nothing to contribute, they can just 'subscribe' to the album, and be notified when new photos go in.

This one is relatively self explanatory, and while a great addition to the Photos app, really should have been there from the start. It doesn't mirror the screen though, meaning you can search for other photos to show without everyone seeing your photo library. Handy if you're at a family gathering…

Google uses machine learning to automatically categorise your photos, intelligently sorting them so you spend less time curating them, and more time looking at them. One of the features it had was auto-face detect, pooling together all of the pictures of a particular person.

Now, you can manually add names and tags to a picture, making it even easier to find the photos you love. 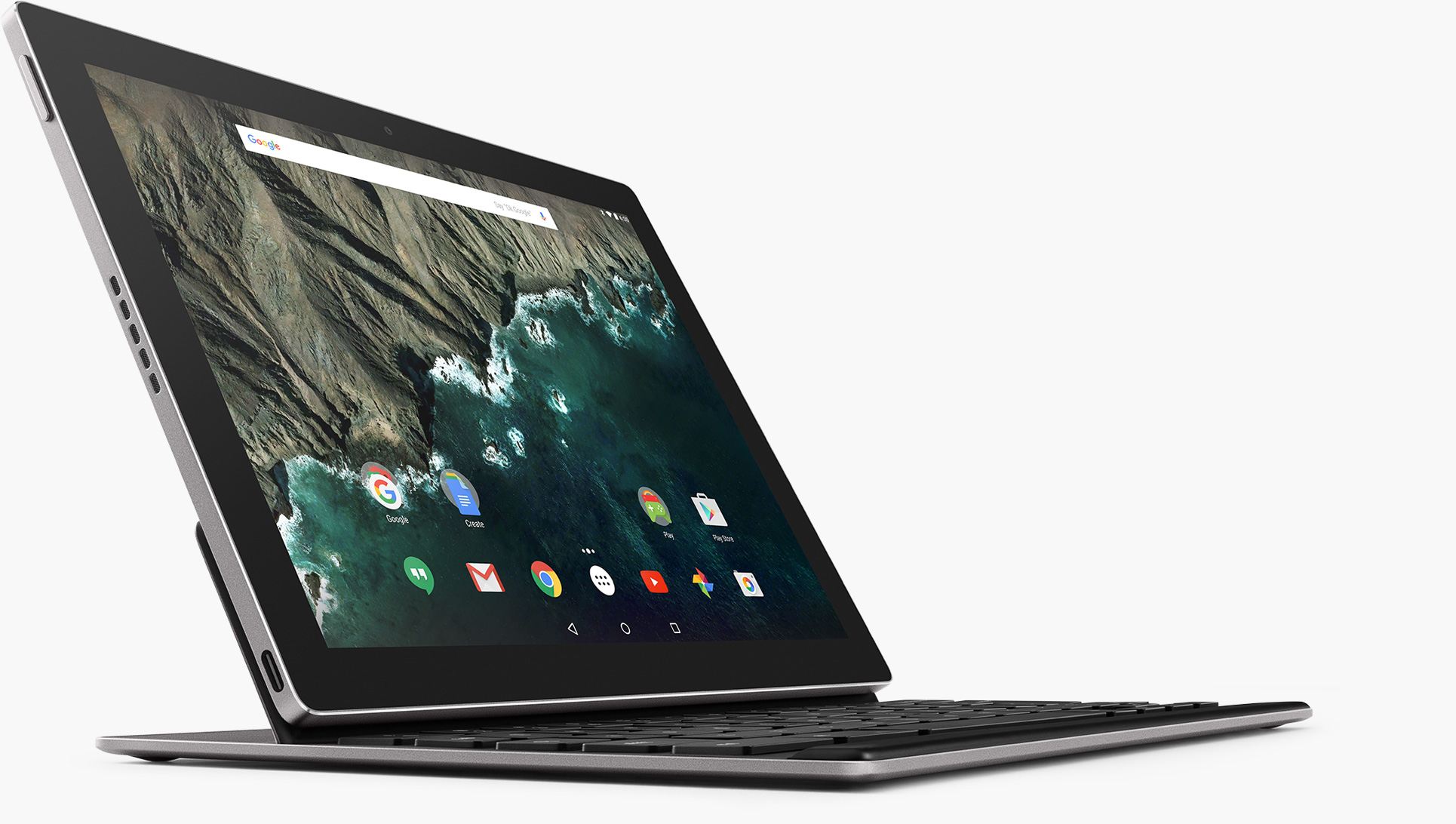 The Pixel team are the brains behind the (hugely expensive) beautiful Chromebook Pixel. They have now put their mind towards working out how to improve tablets, and the result is the Pixel C. The C stands for convertible.

The 10.2inch tablet will be released later this year, and can be purchased with an optional bluetooth keyboard, which reallyimproves the functionality of the Android tablet. The keyboard has magnets in it, which can hold the tablet upright in any position from 100 to 135 degrees, all without any kickstand on wires of any kind. The keyboard also has inductive charging, which means all you need to do to charge the keyboard is put it over the tablet. A few minutes each day will keep it topped up, but should you not close the lid very often, the keyboard will last 2 months before dying. I'm not going to lie, that is a really innovative and clever feature, and I expect it to be adopted by many other manufacturers soon. It has a beast of a processor, an absolutely incredible screen, and 4 microphones that allow you to use voice commands from across the room.

It is probably time we apologise to Microsoft for laughing at their first attempt at the Surface, as it seems like they were onto a winner.

Google announced a solid line of hardware and software updates in today's announcement. The phones tick most of the boxes for Android die-hards, the Chromecast will no doubt continue to sell in its millions, and people will still use Google Photos to store all of their precious memories.

It was more interesting to see what was missing. There was no mention of the rumoured YouTube subscription service. There was nothing on the Nexus Player, which was supposed to be the real answer to gaming and entertainment in the living room. There was also nothing on the future of G+.

Most absent for me though was a sense of pacing and control. Google were jumping from presenter to presenter like nits in a primary class, and none of them seemed comfortable on stage. Perhaps it was just more noticeable when you compared it to the calm, collected, almost insincerely casual Apple presenters, but I really feel Google undersold their products. There was no charm. No real passion, and none of that 'magic' which makes Apple presentations so good at getting you to want to buy things. Maybe it was just me though?

The whole press conference was live streamed on YouTube, which means the archive is instantly available to watch below. If you decide to watch through the whole thing, let me know what you thought of it in the comments below!

Photo courtesy of the Google Blog and Pixel C website 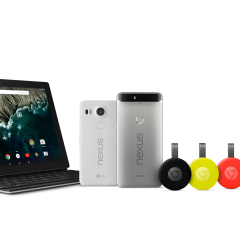 Apple announced their latest flagship phones at the start of the month, Google ends September with theirs