As August gracefully became September, the world continued to spin, and lots of big news events happened, some of which you might have missed. Well now you no longer need to worry about not knowing what's going on, as each Saturday we will be collecting together 10 of the biggest news items, breaking the week into bitesize chunks, and giving you links for more information. Now you get to show off your current affairs knowledge to all of your friends without religiously watching the 24 hour news cycle! You're welcome.

Wes Craven, legendary director of horror films has died in his home in Los Angeles after a battle with brain cancer. He was responsible for such films as the iconic A Nightmare on Elm Street in 1984 with character Freddy Krueger and Music of the Heart. He also subverted the horror genre entirely when he created the Scream series of films which addressed the horror genre as a part of its own terror.

David Cameron backs down over refugees

In a move that was motivated by public pressure as much as it was by an overwhelming sense of morality, Prime Minister David Cameron has announced that Britain will take an extra 4000 Syrian refugees. This comes after images of three year old Aylan Kurdi circled social media and the press, spurring public sympathy and calls for more British action. The UK to this point had only taken in 200 refugees.

After resigning in 2011 amid the phone hacking scandal, and then being aquitted by a jury, Rebekah Brooks has returned as News UK's chief executive. This has caused outrage among certain members of the public, and Chris Bryant, shadow Secretary of State for CUlture, Media and Sport described it as a 'massive two fingers' to victims of the hacking, of which he was one.

There is a growing movement in our country - as symbolised by UKIP's rise in popularity - to leave the EU. For the first time since 1975, the people of Britain will be asked their opinion on the matter in a referendum likely to be held in May 2016, and definitely by 2017. However, the phrasing of the question and opitions are important, for they can be perceived as leading. This is the concern of the Electoral Commission, who has recommended changes in order to protect the legitimacy of the outcome.

With X-Factor returning to our screens once again, many viewers fail to engage, causing the ratings to take a turn for the worst. The number of people watching the opening episode of this particular show has fallen by over a million, raising questions regarding the viability of not only TV talent shows, but also live TV itself. With the rise of On Demand services, consumption of audio-visual media has changed dramatically and only time will tell what survives…

Straight Outta Compton tops the UK and Ireland Box Office, taking £2.49m in its opening weekend. This is perhaps unsurprising considering its US success, with the film becoming the highest grossing biopic of all time. In a stark contrast to this rap-based narrative, Disney's Inside Out remains within the UK's top 10 for its sixth week.

We Are Your Friends scores third worst opening weekend in history

Quite the opposite to the fortune of Straight Outta Compton, Zac Efron's latest film, We Are Your Friends, about a young EDM DJ trying to make his way with his friends has had the third worst opening for a film released in more than 2000 screens worldwide since records began in 1985. It took in a piddly $758 per screen. It was all but torn apart by EDM fans and film critics.

Bill Turnbull has told the Daily Mirror that he is leaving his job presenting the wildly popular early morning news programme after 15 years to afford more time to his passion of beekeeping. He has vowed to spend more time with his bees and said that "15 years is more than enough for me and the audience". He got attention for appearing in Strictly, his ability to be incredibly sombre delivering news as well as being witty in the face of funnier news.

And in lighter news...

Kanye West announces he is running for President in 2020

With the Cyrus-Minaj spat, to the costume wars there was lots of news to come out of the year's VMAs, but no one could've expected this: 'I have decided in 2020 to run for president.' – Kanye West. This was announced at the end of a ten-minute speech that discussed everything from shopping with his daughter, to the former fracas between him and Taylor Swift. After disclosing how he 'rolled up a little something to knock the edge off.' his presidential plans were proposed. 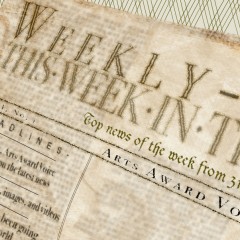