The culture secretary made the announcement on BBC One’s The One Show.

Bradford has been named as the UK City of Culture 2025, after months of competition for the prestigious title.

Announced by culture secretary Nadine Dorries on The One Show, the West Yorkshire city is one of the most diverse cities in the UK, and saw off competing bids from County Durham, Southampton and Wrexham County Borough as shortlisted finalists.

Since the first titleholder of Derry in 2013, the City of Culture has aimed to bring cultural regeneration to areas in the UK. The winning city will hold festivities incorporating different elements of the arts, and cast a spotlight on cities in the UK that are largely ignored.

Bradford’s industrial heritage is reflected in their industrial museums and architecture. Salts Mill is one of its most renowned landmarks, an old 19th century mill which now contains an art gallery, shopping centre and restaurants. Bradford also boasts famous faces such as David Hockney and Zayn Malik.

However, and most importantly, becoming the city of culture will hopefully illuminate local participants within the arts, and give them the platform they deserve.

Bradford will receive £275,000 in initial funding to help the city up until 2025. There are additional hopes that it will generate £700 million and 3,000 jobs, this hopefully having a long term impact after their city of culture status. For the first time, the runners up Wrexham, Southampton and Country Durham will also receive a grant of £125,000.

The previous City of Culture, Coventry, details the positive impact the status has had. Councillor Jim O’Boyle has argued the year has helped attract further investment into the city. Cultural venues such as the Belgrade theatre have also received further investment due to an increase in visits, this money essential for the survival of arts venues across the country. This bodes well for Bradford when it is their turn in 2025.

Shanaz Gulzar, who led the bid, stated the importance of the cultural heritage of Bradford, which also includes its young ethnically diverse population:

"[They] have been so involved in shaping our bid - to become leaders and changemakers and begin a new chapter in our story."

Not only does Bradford have a rich industrial history but also a strong south Asian population. Kala Sangam arts centre specialises in south Asian art, and hopefully Bradford’s City of Culture status will illuminate their voices and aid these communities.

"This is great news for the whole of our area and will be an awesome economic boost for our area…No city deserves this more. As one of the youngest and most diverse places in the UK, Bradford will benefit so much from this platform to highlight everything it has to offer” . 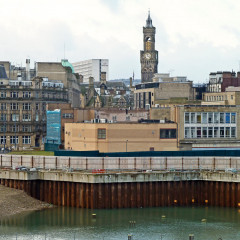 The culture secretary made the announcement on BBC One’s The One Show.