The nation’s favourite footballer and campaigner will be writing ‘The Breakfast Club Adventures’ with Alex Falase-Koya, based on his own school experiences.

Marcus Rashford is now beloved by the nation, not only for his performances on the football pitch but also for his campaigning. His attempts to pull children out of poverty have earned him recognition in the form of an MBE, and now he has set his sights on his next project – a new children’s book.

His first book, the non-fiction ‘You Are a Champion’ became a number one bestseller, and now he is collaborating with author Alex Falase-Koya to write a second, named ‘The Breakfast Club Adventures’.

Back in April, Rashford launched a book club, which aimed at giving books to children who needed them the most. ‘The Breakfast Club Adventures’ will be the third book to be distributed by Rashford’s book club, the first being ‘A Dinosaur ate My Sister’ by Pooja Puri and the second being ‘Silas and The Marvelous Misfits’, written by Tom Percival. The novel is set to be published in May of 2022, and the illustrator of the book is yet to be confirmed.

The age demographic of the book is reportedly aimed to be between eight to 11 years old, and will follow stories from Rashford’s own experiences as a 12-year-old with his “unlikely group of friends”, according to publisher Macmillan Children’s Books. Rashford has spoken about his attendance at school breakfast clubs, and how his family relied on free school meals when he was going through his education. He backed a bill last year to help fund free breakfast provision within schools.

Rashford said: “I wanted to create something that really captured the true spirit of the breakfast club. Outside of making sure we got the best start to our days with cereal, toast and juice, it was where my friendships were made. Where we could just lose ourselves. A safe haven.” He continued to say, “Breakfast club was where some of my greatest memories were formed, where we talked about our dreams and where adventures were planned, and it was important for me that we captured that in my first fiction book. Alex is a great writer who is able to capture that brilliantly and I’m thrilled that he’s on this journey with me.”

False-Koya has won the Spread the Word London Writer’s Award in 2019, and is the author of the new superhero series, Marv. He has stated he was “very excited” to work with Rashford. He said: “Books changed my life when I was a kid, making me take a closer look at the things around me and taking me to worlds far from my own. I hope that this book gets the opportunity to do the same for other people.” 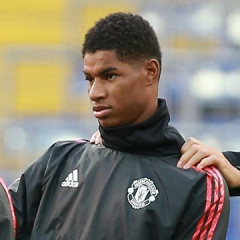 The nation’s favourite footballer and campaigner will be writing ‘The Breakfast Club Adventures’ with Alex Falase-Koya, based on his own school experiences.