The Adani contract reveals that the museum has agreed to not say or do anything that “may reasonably be foreseen as discrediting or damaging the goodwill or reputation of the sponsor”.

Channel 4 News has revealed that the Science Museum signed a contract with Adani Green Energy to sponsor an ‘energy revolution’ gallery that also included a ‘gagging clause’, triggering intense backlash from the scientific community. The contract seemed identical to one signed with oil company Shell earlier this year.

Documents shown after a Freedom of Information Act (FOIA) request highlight that the sponsorship deal was negotiated with the Adani Group, who are heavily involved with the coal expansion apparent in Australia and India. They reportedly gave guidance to the Science Museum on how to counter the criticism of the coal industry and Adani’s mining projects. The information comes as 60 leading scientists and museum contributors have committed to not working with the Science Museum Group (SMG) until they prohibit the acceptance of fossil fuel funding.

In the documents released, SMG agreed, in an identical clause to the Shell contract, “to take reasonable care not at any time during the term to make any statement or issue any publicity or otherwise be involved in any conduct or matter that may reasonably be foreseen as discrediting or damaging the goodwill or reputation of the sponsor.” This has seen criticism, as it will stifle SMG’s ability to accurately present the environmental role that fossil fuels play, and that Adani and Shell contribute to the climate crisis.

Negotiations seem to have been between the Adani Group’s chairman’s office directly, not with the Green Energy subsidiary of the company, whose name is not mentioned until close to the contract being signed. Some have said that chairman Guatam Adani shouldn’t be able to sign the documents, as he has no title in the subsidiary sponsoring the exhibition. The document itself mentioned that the “Chairman does not have any official title within Adani Green Energy currently. In case we need to include his name, we will have to do some additional formalities at our end to make it happen.”

There is now clarification that he is in fact the chairman of Adani Green Energy as well as Adani Group, which undermines SMG’s argument that the sponsorship is solely from Adani’s Green Energy company and had nothing to do with Adani Group. The museum’s due diligence report on Adani Green Energy also shows no mention of coal at all, even in their wider business activities summary, which undermines the credibility of the due diligence process as the wider company’s controversies and fossil fuel connections were not identified. However, the report does mention corruption allegations aimed at Adani, and highlights that he has been debarred from trading in the Indian stock exchange.

Director of SMG, Ian Blatchford appeared on BBC Front Row on 27 October, where he actively defended Adani Group’s coal mining activity after being criticised by a local indigenous community. Adrian Burraguba, spokesperson for the Wangan and Jagalingou Family Council, said, “by putting this company on a pedestal, the Science Museum is complicit in Adani’s violation of our Human Rights and destruction of our ancestral lands”.

When asked about his thoughts on the statement, Blatchford responded by saying: “Well, Adani and their coal interests in Australia do get accused of a whole variety of things but the company would push back very strongly on those accusations… So, although you’re quoting one voice, I would not say that that is a definitive intervention on the issue, because we’ve thought about two things: not only [Adani’s] response to that and the truth of it – and there is certainly a great tendency for some campaigners to exaggerate very significantly those issues – but also we’re looking at other voices.”

Many prominent scientists and museum contributors have published a signed open letter, announcing they will not be working with the group until they end partnership with fossil fuel companies. The letter states: “Many of us have excellent personal relationships with the talented and committed members of staff that deliver the Science Museum’s programme but we can no longer be complicit in the policies adopted by the Group’s senior leadership and trustees. With sadness therefore, we commit not to work with any organisations in the Science Museum Group until it announces a moratorium on partnerships with fossil-fuel-producing companies. This means publicly committing not to renew any existing contracts when they expire, or to form any new ones until, at the very least, the company demonstrates a credible plan for phasing out fossil fuels in line with the Paris 1.5°C target.”

A youth-led boycott of the exhibition ‘Our Future Planet’, sponsored by Shell has been in effect since the museum’s announcement of the project in April, and on October 2, former director Prof Chris Rapley resigned from the Advisory Board over its “willingness to accept oil and gas sponsorship”. Alongside this, mathematician and presenter Hannah Fry and director for the Institute of Research in Schools, Jo Foster, both resigned from the museum’s Board of Trustees for the same reason. 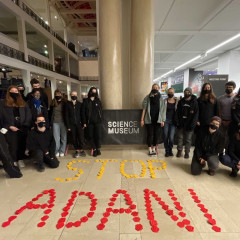 The Adani contract reveals that the museum has agreed to not say or do anything that “may reasonably be foreseen as discrediting or damaging the goodwill or reputation of the sponsor”.