The United Nations have officially awarded Belfast the title, and they are the third UK city to earn the accolade.

Following a bid from Belfast Council, the city has been named a UNESCO City of Music, alongside cities such as Liverpool, who earned the title in 2015, and Glasgow, who were named in 2008.

Snow Patrol’s Gary Lightbody and composer Hannah Peel are appointed Belfast Music patrons. Lightbody has said that music is “woven into the DNA of Belfast”. He said: "I've watched, in these last 25 years of relative peace, the music scene grow and then thrive and now burst at the seams with fearless and limitless talent, we have all fought hard for our culture to thrive and the results are plain to see - Belfast's heart beats fervidly with music."

Belfast has met the requirements for the award, which include being able to host national and international music festivals and events. They also have ample specialist music education, and a number of venues both big and small for gigs and concerts. The city heavily promotes music from multiple genres, and gets many people involved within the musical scene.

Hannah Peel stated that Belfast is an “alive, vibrant, and musically powerful city”. She said: "We are so much more than just Van Morrison and the Undertones, there is female-empowered punk, new wave, Brit-nominated EDM, jazz and an abundance of classical music that runs through the veins of the city. Yet to the wider world it is all unheard of, underground, eclipsed by its past but still supplying a pulse and vibrancy that needs to be lauded for the future."

The bid to make Belfast a UNESCO City of Music was raised in 2019, as part of the city’s ten year cultural strategy. A council survey consisting of 20,000 people was conducted prior to the bid, which asked: “What does home mean to you?” Music appeared recurrently in responses. Belfast’s Lord Mayor, Kate Nicholl lauded the news, saying: "Belfast is proud of its music culture. Creativity and resilience are in the very fabric of our city and our people".

“Last April, we launched a 10-year cultural strategy which will see a ‘year of culture’ in 2024. The UNESCO accolade is the perfect way to kickstart these plans, much of which revolves around music.”

The city, alongside Derry and Strabane, had also been bidding to become the European Capital of Culture in 2023, but the European Commission has denied their bid, stating that the city could not hold the title because of Brexit.

UNESCO has said that the new status will "open a new era of collaboration between the city, citizens and music communities". Belfast will now work to host “a series of high-profile events”, and music will be “woven into public spaces and places to ensure the power and benefits of music can be felt by all who live, work in or visit the city." 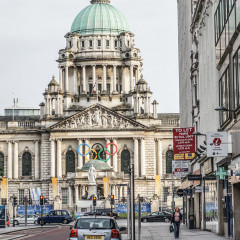 The United Nations have officially awarded Belfast the title, and they are the third UK city to earn the accolade.