The museum is to be the second in Liverpool dedicated to the legendary band, and was announced in chancellor Rishi Sunak’s Autumn budget and spending review

Chancellor Rishi Sunak’s plans to build yet another Beatles attraction in Liverpool have been criticised by Music Venues Trust as “pointless nonsense that no-one needs or wants”. Sunak’s proposal was announced as part of his Autumn budget and spending review last week, as part of an £850 million investment into the culture sector, mainly to protect galleries, museums, libraries, and local culture in the UK.

During Sunak’s speech to the House of Commons, he proudly stated that, “thanks to the Culture Secretary [Nadine Dorries], over 800 regional museums and libraries will be renovated, restored, and revived, and she’s secured up to £2million to start work on a new Beatles attraction on the Liverpool waterfront.”

The chief executive of Music Venues Trust has criticised the plans, he said in a statement to Metro: “It’s headline-grabbing, pointless nonsense that no-one needs or wants and [which] does precisely less than the sum of bugger all to support genuine creativity, eating up real money that could make a real difference.

“Liverpool has a vibrant and thrilling culture of creativity with new music beating out of an under-lit and wonky stage delivered by the next generation of great artists from the city. Its infrastructure of grassroots music venues, the places that actually inspired and developed the Beatles, is massively under-invested in, crippled by the COVID crisis, and in desperate need of support.”

The government has said that the Beatles museum’s funding will help Liverpool “develop a business case for a new Waterfront attraction celebrating the work and legacy of the Beatles, and consider future funding for this project subject to the business case”. Davyd has clapped back at them saying the funding “doesn’t buy a single brick”.

The government’s disregard for the music sector especially has been in the limelight as of late – the pandemic has brought on turbulent times for grassroots music venues that are still attempting to become stable after the pandemic took its toll on the industry. Last year, one in three music industry professionals lost their jobs due to lack of government help, and more and more venues are struggling to stay open.

Instead of putting the funding into a more stable music industry that can then spawn the next iteration of a Beatles-like musical act, Sunak and company have opted to celebrate the past rather than the future, a past that has already been celebrated heavily. The original Beatles museum opened in 1990, and does draw tourists, however to have another seems like overkill, almost an admission that Britain has nothing more to give, which is utterly wrong, unless the government continues to disregard grassroots venues and their importance.

Header Image Credit: "Beatles Museum" by dierk schaefer is licensed under CC BY 2.0 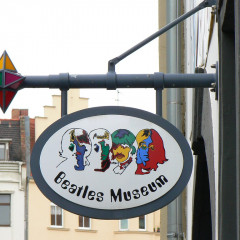 The museum is to be the second in Liverpool dedicated to the legendary band, and was announced in chancellor Rishi Sunak’s Autumn budget and spending review