Left-leaning news channel Novara media was "permanently" taken down from the site before being reinstated a few hours later, in an apparent mistake made by YouTube moderators.

Novara media has spent years cultivating a large following on their YouTube channel, which now harbours more than 170,000 subscribers. The site is a leftist news channel that covers issues such as climate change, social policy and capitalism. The site was abruptly taken down by YouTube for a couple of hours before being reinstated on the site, leaving journalists who work for Novara media and it’s followers in the dark. The initial statement made by YouTube to Novara mentioned that the channel would be banned permanently, leaving many working in the newsroom unsure about whether the organisation could continue.

Ash Sarkar, political activist and journalist works as contributing editor on the platform. She said in a statement: “We had this ambient awareness of our dependence on these big tech platforms, but there’s nothing like having your livelihood snatched away from you to make you feel really disempowered.”

YouTube regularly deletes channels, amounting to around 2000 every hour. The removals are intended to stop spam, misinformation, financial scamming, hate speech, nudity and material that violates the site’s policies. However, the enforcement of these deletions can be done mistakenly, and questions could be raised as to whether the deletion was actually accidental, or whether Novara was targeted, as the channel is often unapologetically challenging politics and right-wing ideals.

Only after uproar online did YouTube address their so-called mistake, responding to tweets made by Novara followers and workers condemning the takedown. Novara Media was lucky, as there are still many political commentators, activists and journalists who have not been treated as kindly. This is particularly prevalent in countries like Belarus, Russia and Turkey, where authorities pressure Youtube to remove opposing political content, and the company doesn't have as much cultural expertise.

In the takedown email, YouTube claimed that Novara were guilty of “repeated violations” of their community guidelines, but with no elaboration. YouTube uses a three strike system to remove creators, and Novara had only been flagged once prior after covering an anti-vaccination rally, and YouTube later amended their decision. The last content uploaded to Novara before its removal was about UK sewage policy.

Right-wing groups sometimes attempt to attack leftist channels online by coordinating campaigns to file complaints, which then triggers YouTube’s moderation algorithm to block the channel. When appealing the deletion, an editor of Novara attempted to talk to a member of YouTube’s team, before the site crashed after the first few messages were sent.

Novara posted a statement on Twitter, saying: “We call on YouTube to immediately reinstate our account”. YouTube then promptly reinstated the channel after backlash from both followers and members of Parliament. Michael Walker, who hosts the show TyskySour on the channel, said: “They are a monopoly, there is no alternative, if we move to Vimeo or whatever other platform, we wouldn’t acquire the viewers.”

Many newspapers in the UK tend to lean towards right-wing ideology, and Novara is one of the largest forms of opposition coverage available. The channel's viewership has grown exponentially, especially after covering the government’s reaction to and handling of the pandemic.

The channel pays its workers in a communist capacity, with all members of the team equally getting paid £16.50, regardless of what they do for the company. Ash Sarkar describes in her Twitter bio that “Novara’s shows are wonky, occasionally confrontational and unapologetically left-wing. “Luxury communism.”

This is at least the fifth time that the channel has seen deletion of content through various social channels, Ed Proctor, CEO of the Independent Monitor for Press, mentioned that most of the time the takedowns come with no explanation. He said: “We have real concerns about platforms that are arbitrarily acting as regulators by default, what you saw in the Novara Media situation is something we can see becoming a regular occurrence.”

Proctor doesn’t seem to be wrong, there have been so many instances now of YouTube making “mistakes” with their banhammer, yet not much can be done to mitigate the fact that the majority of all media consumed worldwide comes directly from the site, alongside other social media powerhouses like Facebook and Twitter. With the way things are going, it will not be surprising to see more and more instances of improper deletion, as political tensions rise and more political content creators surface on the website. 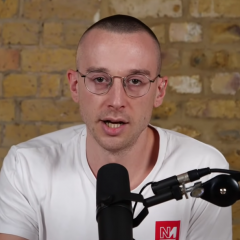 Left-leaning news channel Novara media was "permanently" taken down from the site before being reinstated a few hours later, in an apparent mistake made by YouTube moderators.