The band have won the award following the release of their tenth record, As The Love Continues.

With the group's tenth album, As The Love Continues, Glaswegian band Mogwai has won the prestigious award for Scottish Album of the Year (SAY). When the album was released in February, the group went straight to the top of the Scottish album charts.

This is the first time the band have won the award, after being nominated four times in the past They beat out the likes of Biffy Clyro, Stanley Odd, and The Snuts. Other artists nominated this year included AiiTee, Joesef, Lizzie Reid, The Ninth Wave, and Rachel Newton. The last winner for the award was Edinburgh rapper Nova, who opened this year’s ceremony, other performances came from Hamish Hawk, Sacred Paws, Bemz and Alasdair Roberts.

The ceremony was held at Edinburgh’s Usher Hall on Saturday night, upcoming singer Lvra also won a new Sound of Young Scotland award and the ceremony held a tribute to the late Frightened Rabbit frontman, Scott Hutchinson, who committed suicide in 2018.

Mogwai’s lead guitarist Stuart Braithwaite accepted the £20,000 award and trophy, he said: "I really was not expecting this, I have not thought of anything to say other than thank you and I wish I'd got steaming. This has been a really mental year for the band and this is just another thing we never thought would happen.” He added: “I want to thank everyone who has bought and played the album, I'd like to dedicate this to Mick (Griffiths), our booking agent, who passed away last week."

Frightened Rabbit also received the award for Modern Scottish Classic, for their 2008 breakthrough record The Midnight Organ Fight. The band were formed in their home-town of Selkirk, by Hutchinson and his brother Grant. When accepting the award, Grant Hutchinson said : "I don't why you're clapping for us, we didn't write any of it. All of us can come at it from the same place that all of you can - this was and is Scott's album. These are his words and they should be shared by all of us. It's amazing to have an album that's 13 years old and still inspires artists today, because it still inspires me every day.

"We recently put a book of Scott's lyrics out and I listened to every single song and read every single lyric. He has all the talented genes. This shouldn't be a sad and sombre remembrance award, it's not what he would have wanted. He would want us to sing and dance and get sweaty."

Since his brother’s death, Grant Hutchinson has stressed the importance of looking after mental health; he ended his speech by mentioning to the audience that they should reach out to people that they know. "If everyone here tonight could do one thing - if you could text someone in your phone book who might need to hear from someone,” he urged, "Just ask them how they are or if they want to meet up. Just say hi, it might change their path." 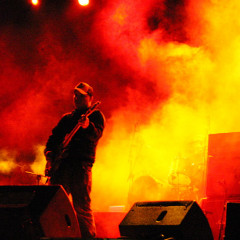 The band have won the award following the release of their tenth record, As The Love Continues.