Animal Crossing: New Horizons has received what has been confirmed to be its final direct concerning free updates on 15 October. Almost 200,000 people tuned in from across the globe to learn about the upcoming characters and cosmetics that will find their way onto their islands in Nintendo's smash hit.

Animal Crossing: New Horizons released on the Nintendo Switch on 20 March 2020, selling 31 million copies by the end of the year and breaking the console record for most digital sales in a single month.

Fans of the game eager for a reason to return to the charming and relaxed real estate simulator will be happy to hear that its largest (and final) free update will release on 5 November. Here's what players can expect:

Kicking off the direct came the reveal that long-time franchise staple Brewster's Roost will be making a return. In this rooster-owned café, villagers can drink coffee, encounter other islanders, and invite other players to kick back with a good cup of Joe.

Another iconic character from previous games that was not included in New Horizons, Kapp'n will soon be available to guide villagers to mysterious new islands that were previously inaccessible. He also sings sea shanties. Adorable.

Harv the dog photographer (as in a photographer who happens to be a dog, not someone who only photographs dogs) now owns his very own island, where he hosts a number of unique shops selling previously unpurchasable merchandise. The island will include fortune-telling services from Katrina, and new furniture designs from Reece and Cyrus.

The update will also include more power over the goings-on of your own island. First of all, the player will now be able to organise group yoga sessions, using the joycons' motion-control features. There will also be island ordinances, allowing you to manipulate the routines of the islanders, including an 'early bird' ordinance that lets you wake everyone up earlier in the morning. Additionally, the player will begin to encounter gyroids, strange wooden shapes that play various sounds and can be planted around the island. Other mechanics such as permanent ladders will also be gracing the game, but a much improved storage system may be the best one.

You can now cook meals using the ingredients garnered from your harvest. You will also be able to adjust the settings of the in-game camera, viewing the world in first-person or setting up a tripod to get your character into the shot.

A ton of new customisation abilities will be added. This includes the external features of your buildings, various fences, ceiling fixtures, wall options, and a considerable amount more.

For the final announcement, the direct revealed the first paid DLC for Animal Crossing: New Horizons. It will be entitled Happy Homes Paradise. Anyone who purchases the $24.99 add-on will be free to visit an archipelago filled with a diverse number of islands. The player will be employed to design a number of holiday homes for specific clients, taking cues from hints dropped by the characters as to their specific preferences. Lighting, soundscape, and seasons will all be customisable for each of the holiday homes. The DLC will be released along with the rest of the update on 5 November. 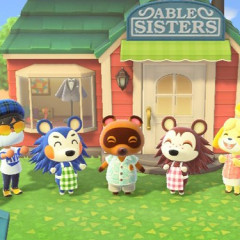