Voice MagNewsColdplay will use el…

The band’s next tour will be powered partly by those in attendance, in an effort to reduce the band’s carbon footprint.

After the band pledged two years ago to not tour unless they found a more sustainable and climate conscious way of performing, Coldplay have announced that they will be partly powering their live show with an electric dancefloor, so that when fans are jumping up and down, they create power. It is part of a 12 point plan that they have to reduce their carbon emissions.

The band’s vocalist, Chris Martin has stated that they will use “kinetic flooring” at their new shows, allowing the band to perform using energy partly created by audience participation. “When they move, they power the concert,” he told BBC, adding, “and we have bicycles that do the same thing.” Martin mentioned: “The more people move, the more they're helping. You know when the frontman says, 'We need you to jump up and down?’ When I say that, I literally really need you to jump up and down. Because if you don't, then the lights go out."

The band have said that they will plant a tree for every ticket sold at their shows. They last toured over 2016-17, during which they performed to around 5.4 million people. It was one of the biggest tours of all time, earning over $500 million (£380m).

Contrary to their eco-friendly touring plans, the band have said that they will continue to fly on private jets, Martin has said that he is expecting backlash, saying: I don't mind any backlash at all, we're trying our best, and we haven't got it perfect. Absolutely. We always have backlash for everything. And the people that give us backlash for that kind of thing, for flying, they're right. So we don't have any argument against that." According to Martin, his aim for touring within the next few years is to “slightly shift the status quo of how a tour works.”

When asked the question, ‘why tour at all?’ the lead singer said: "And that's where we don't really have any comeback except, we would really like to. We could stay at home and that may be better. But we want to tour and we want to meet people and connect with people - so try and do it in the cleanest way possible."

The band’s tour was announced on Thursday, and will commence in March, starting in Costa Rica, a country which has the highest renewable energy rates in the world. Each concert will use electricity from batteries fuelled by fans, as well as solar energy, recycled cooking oil, and mains power from 100% sustainable sources when available.

Despite the band’s efforts, Martin is unsure how to combat the carbon footprint of certain aspects of touring, saying: "In some areas, there's still not enough possible, like how do you get people to a venue without consuming any power? That's still really hard, or flying - there's still a lot of offsetting we have to do, because even sustainable aviation fuel isn't good enough yet. So we know where we still have a long way to go. But in terms of the show itself, the whole show is powered from renewable energy, which is amazing." 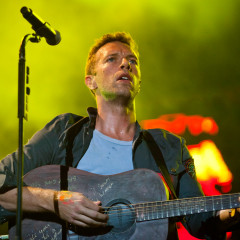 Coldplay will use electric dancefloor to power world tour

The band’s next tour will be powered partly by those in attendance, in an effort to reduce the band’s carbon footprint.