Okay, I'll get probably the most asked questions out of the way. What's the weirdest thing you've ever juggled?

Hmm. Well, juggling weird things is kinda my wheelhouse, so in my time I've done clothing, furniture, electric carving knives, pints of beer (without spilling, of course). I did once pull the tablecloth with a small dog on the table...

And what about the most difficult?

In "Showman", my current show, the most difficult single object to juggle would probably be the carving knives.

What makes that so difficult, is it the weight or the shape?

It's an odd one – I juggle them while they're jammed in the "on" position, which is obviously absurdly dangerous, but what makes them hard to juggle is that the gyroscopic motion of the electric motors running inside them makes them spin in the air unlike any other object - they kinda corkscrew. First few times I did it, it was pretty scary.

What about the most dangerous thing you've juggled?

Has anything gone badly wrong on-stage before? Did you carry on the show?

I think knowing that you're going to do dangerous things, makes you prepare extra carefully, warm up, etc.. – so far, nothing major has gone wrong. Aaaand now I've jinxed it. By the time this gets posted, I'm invariably dead.

Has this always been your profession? What's your "origin story"?

Bitten by a radioactive juggler. Yeah, it's the only real job I've ever had. Saw a street performer when I was on holiday as a kid with my parents, and thought it was the coolest thing. By the time we went home, I'd bought three rubber dog balls from a pet shop and was on my way.

What first interested you about being a Gentleman Juggler more than any other style or form of juggling?

I'm a sucker for the ingredients of a gentleman – manners, civility, wit, knowledge and of course a nice suit, so to find out that there used to be a breed of performer who embodies all of that, as well as being incredibly creative jugglers – I was hooked. I love the idea of working with objects that people have some experience of, and I like how the theatricality of a gentlemanly on stage persona can modify something that might be considered tacky showing-off into something a little subtler and perhaps cooler. Being a gentleman on stage has also helped me become more of a gentleman in real life. Gotta love it for that.

What has been your favourite performance? Why?

Oooh thats a tricky one. So many, and for so many different reasons. My first couple of street performances when I was a wet-behind-the-ears teenager, because they showed me that making money out of this rubbish was, in fact, possible – so they were important to me. I try to enjoy every performance – otherwise what's the point of doing this stupid job? And of course the hope is that the best performance is yet to come...

Your shows are so much more than just juggling, you build a fantastic rapport with the audience, do you write all your material beforehand, or is it all improvised?

Thanks :) Yeah, if my work was just juggling, I'm not sure it'd be interesting for an audience for more than about 5 minutes. My script is written, and worked in, and polished, and re-written, and then spaces are kept in there, just in case an opportunity for some fun improv comes up. I like to have a bit of a dialogue with the audience – got that from street performing – makes it more fun and interesting for everyone, I hope.

Now, you don't have a show up in Edinburgh this year, will you be showing up there at all – as part of someone else's show or otherwise?

Fraid not, I'm taking some time off to work on secret plans elsewhere!

Do you plan on taking a new show up next year?

Probably not. The thing about what I do, is that it takes years and years – literally – to learn and perfect new work. I didn't want to come back with a show that contained things that people who have seen "Showman" had seen before, so that means taking a few years away from the fringe to research and develop whole new skillsets. Rest assured though – I have a couple of new projects in the early stages – I'm sure I'll be back at some point.

Are there any shows that you know of in the Fringe this year, that you think we and our readers should check out?

Lili La Scala's "Another Fucking Variety Show" is your perfect late night cabaret explosion. Full disclosure – I've been a core cast member of it for a few years, but of course I won't be in it this year – I'm not sure who will take my place on the bill, and would never encourage anyone to heckle "YOU'RE NO MAT RICARDO" at them.

Apart from that, to be honest, I'm not very well up on who's going to be there, since I'll be somewhere else. Go see some street shows. Go shout at Greggs for halting production of the macaroni pie. I mean, seriously, how can there even BE a fringe now?

If you could go back to your 16 year old self, and give yourself one piece of advice, what would you say?

Oh man, I try to do this regularly in my head. He was a very different creature. I'd tell him that all the things that make him feel different, that make it hard for him to fit in, that got him bullied – those are the things that will put him on the path that will bring him pretty much everything good in his life. I'd also tell him that the thing that he didn't understand where he'd sometimes have black days where things felt desperate and horrific for no discernible reason – that's not going to go away, but he'll end up being less scared and confused by it, and learn how to live with it. I'd also make him very happy by telling him that thirty years later he'd be friends in real life with Doris from "Fame". He so totally wouldn't believe that.

I'd like to finish off the interview with some quick-fire questions:

Right now, a blue tweed three piece from Walker Slater. Always looking for the next one though...

Been reading Marvel since the 70's! Excelsior!

Milk in your Tea?

No milk and no tea. Espresso.

Phone. Watches seem like an unnecessary affection more and more, no?

One quick bit of advice for anyone looking to work in the arts?

Find the thing that's important to you, and find a way of doing it that nobody else does. There's your starting point. Oh, and work hard, and then harder.

Thank you for taking the time to answer my questions, and I wish you the best of luck with your tour in both the UK and Belgium!

Mat Ricardo's "Showman" will be touring the UK in October this year (2015), dates can be found on his website: http://www.matricardo.com/. We reviewed this show last year as part of our Edinburgh fringe coverage, the original review can be found here: http://www.artsawardvoice.com/magazine/reviews/mat-ricardo-showman 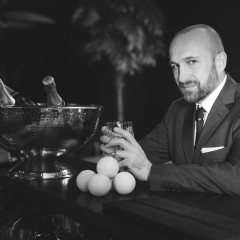